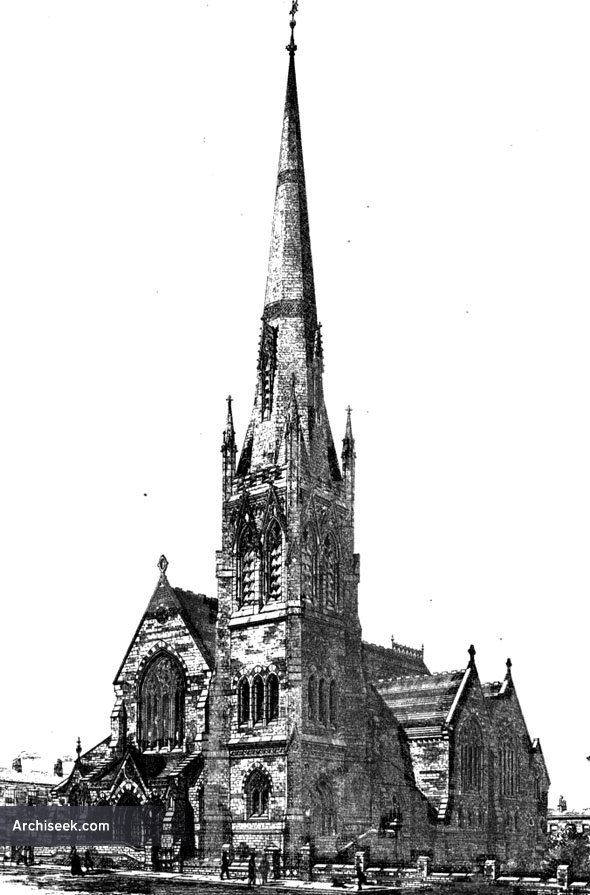 From The Architect, December 4, 1875: The style of this church (which consists of nave, aisles, transepts, vestries, and organ chamber) is Gothic, of somewhat Early Decorated character. There are galleries in the transepts only, which are reached by staircases at the east end of the church. The general plan is cruciform, with nave and side aisles, and double transepts with deep apse, vestries, and organ chamber at the east end of the church. At the west end, towards Cross Street, are the principal entrances, consisting of three large central doors and spacious side door in the tower. At the east end are two subsidiary entrances, which give access to this portion of the ground-floor, and also to staircases leading to the only galleries in the building”” namely, two small ones in the transepts.

The whole interior of the building is lined with Bath stone, relieved with bands, columns, and geometrical designs in blue Bath and other coloured stones. The three bay ends of the apse (which is semi-octangular in form) have a two-light window in each bay, the space between the floor and the window-sills being filled in with handsome traceried panelling, with polished marble columns, and surmounted by a moulded and enriched cornice, the whole forming a reredos. The organ chamber opens into the apse and north transept by means of two wide and loftv arches. On the other side of the apse is a vestry on the ground-floor and a ladies’ room on the gallery level.

The whole of the arches throughout are in alternate stones of white and blue Bath stone.

The exterior of the building is of Gillies Delph in drop coursed work, relieved with bands of a different coloured stone; the windows and other dressings are of Longridge stone.

The main front of the building in Cross Street consists of a lofty centre gable, pierced by a five-light tracery-headed window, with attached columns onjambs and mullions having carved foliated caps and moulded bases and bands; beneath the sill of this window and extending along the whole of the front are the entrance lobbies; opening into these are the three large doors before referred to, and on each side of the doorways is a two-light window.

Over the centre doorway rises a gable, the tympanurn of which is filled with tracery panels and carving.

At the south-west angle is placed the tower and spire, which rises to a height of 187 feet to the top of the vane.

The former is in three stages, the lower one appropriated as an entrance, the second as a floor for ringers, and the third as a belfrv, being pierced with No. 8 two-light windows.

The total internal length of the building is 132 feet 3 inches; width across aisles, 64 feet 4 inches; across transepts, 75 feet 4 inches. The roof is open timbered, that over the nave to half its height with circular moulded ribs springing from stone columns; the height from floor to nave ceiling is 42 feet 0 inches; to apex of roof, 50 feet 0 inches; height of aisles to wall plate, 17 feet.

The pewing and gallery fronts are constructed of pitch pine, the choir seats and lectern of oak. The church accommodates 1,120 adults on ground floor, including choir, and 100 in the transept galleries. The organ was supplied by Messrs. Willis, of London, and cost 1,OOO.

The building was erected from the design and under the superintendence of Messrs. J. Tabbing & Son, at a cost of 5,20., including lighting and heating, but exclusive of site.