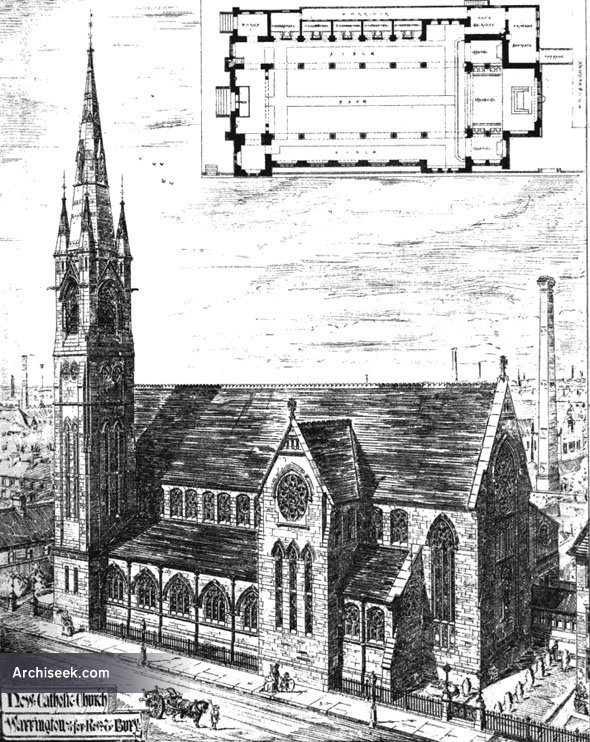 St Mary’s Church, Warrington is a Grade II listed building and is an active Roman Catholic church. The church was designed by E. W. Pugin and its construction started in 1875, just before Pugin’s death. It was completed by Peter Paul Pugin in 1877, and the tower was added by Peter Paul in 1907. A northeast chapel, the First World War Memorial Chapel, was added in 1923. Pevsner considers it to be one of their best churches.

From The Architect, October 9, 1875: In this week’s number we give a bird’s-eye view of the above :hurch. It has been erected in the style of the Early French Gothic, and consists of a nave and aisles, north and south transepts, chancel and side chapels, besides sacristies, &c., and will seat about 700. The total length is 144 feet; width, 60 feet; and height, 67 feet to the ridge. The exterior ia faced with Yorkshire pierpoiuts, the external and internal dressings being: in Ramhill stone, and the arcading between nave and aisles in red and yellow Mansfield. The cost is 9,500/., which does not include upper portion of tower. It was designed by, and has been partly carried out under the superintendence of, the late E. Welby Pugiit, and since his death under that of his brothers, Messrs. C. W. & P. Ptjgin. Mr. Hugh Yates, of Liverpool, is the contractor.