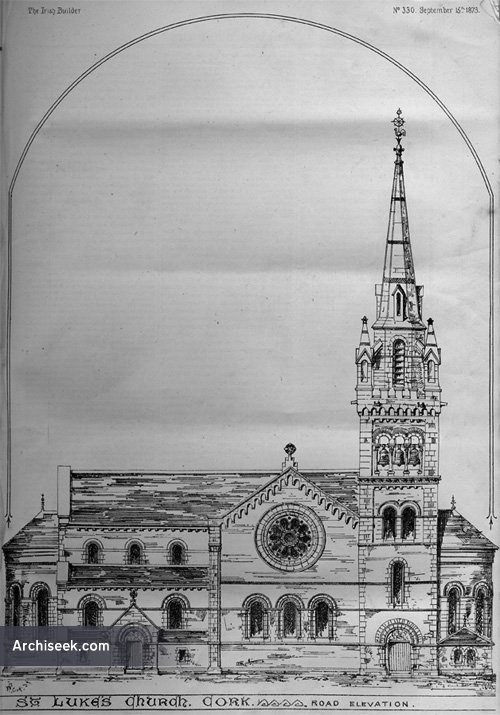 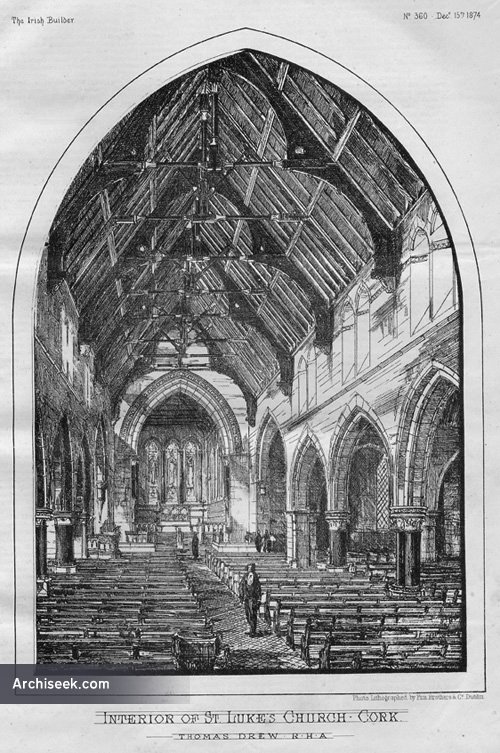 Saint Luke’s Church of Ireland was the third church to stand on the site. Sir John Benson and William H. Hill designed the church in the Romanesque style. The church was destroyed by fire on 9 February 1887 and was replaced by a new church designed by Hill alone. The church closed in 2003 and now serves as a cultural centre.

“As promised some time since, we now present a geometrical elevation showing one of the fronts of this building, viz.””that facing the road, or St. Luke’s Cross. The design is by Sir John Benson, in conjunction with Mr. William H. Hill, the diocesan architect, who is now having the works carried out; and already very considerable progress has been made. The effect of the portions executed is most effective; and, as an architectural composition, decidedly good. Unlike very many designs of the present day, the building is better than the drawing.

The North-Italian-Romanesque (if we may use such a term) is the style adopted; and, as far as we can judge from inspection of an incomplete structure, with the best possible results. The space at the disposal of the architects was singularly irregular and circumscribed, and the utmost has been made of it. The new building is planned to extend to the limits of the ground on three sides, leaving the fourth””the eastern””for a future enlargement in that direction;

The old red sandstone of the neighbourhood, in punched random ashlar, is being used for the walling, with dressings of chiselled limestone; the internal dressings of Bath stone, and red marble columns, and the internal facings of walls executed with a very light salmon-coloured enamelled brick, with deep red bands and discharging arches; open timber roof of pitch pine, of flat pitch, supported on ornamental curved ribs, with a central dome at intersection of nave and transepts, and half domes over the apses””north and south. On the whole, the arrangement appears a very complete one, although an innovation on the “Established Ecclesiastical Commissioners’ Plan,” which has so long held sway in Ireland; but we are bound to admit that in many essential points of practical utility, the new St. Luke’s will be found to possess many advantages over the stereotyped so-called Gothic buildings of the past thirty years

We cannot but admire a structure in which fitness or adaptability for the purpose of its erection is made the leading object to be attained; and we shall certainly be greatly disappointed if St. Luke’s Church, when complete, does not fulfil the condition. The only feature of the external design that we are disposed to quarrel with is the “spire” portion, which crowns the campanile or tower; this, we understand, is to be the original spire, modified and reset, to meet the wishes; or rather to conciliate the conservative prejudices of the residents of the neighbourhood (both Catholic and Protestant), who from the force of habit and ignorance of art are so wedded to the old familiar form, and that willy-nilly it must go up again, notwithstanding that its presence (at no time good) will mar an otherwise perfect and complete design.

The building, when finished, will accommodate a congregation of about 900, and the cost will be about £6,000. We hope, before long, to give an internal view of this building; and at the same time to enter into a more detailed description.” Published in the Irish Builder, Vol. XV, 1873.

The Cork Examiner of 15 January 1875 describes the interior of Saint Luke’s Church as follows: ‘What strikes one chiefly about the interior is its lightness, loftiness and spaciousness. The length of the nave is 114 feet and the width across the transept 82 feet. Nave and transept being both of great width, the semicircular arches which span their intersection are of extraordinary size and beauty. They spring from neat shafts resting upon curved corbels projected from the faces of four lofty piers. The groined ceiling at the intersection is of timber, painted blue and spangled with stars. The chancel is at the southern end of the nave, and its special features are its five rich stained glass windows in the apse, the subjects in three of which are – the Good Shepherd, the Prodigal Son and the parable of the lost groat. These windows are the gift of Mr Wm. Goulding. On the east side of the choir, in the angle of the transept, is the organ chamber, where has been erected a costly and beautiful organ, built by Foster and Andrews of Hull. The aisles are short and narrow, in proportion to the nave and transepts, from the former of which each is separated by three lofty arches, supported upon handsome pillars of Cork red marble, polished. The capitals of the columns, corbels and shafts throughout the interior are of Bath stone, very beautifully carved by Mr MacLeod of this city. Perhaps the chief merit of its construction is the fact that from any point within the Church almost the whole interior can be seen.’