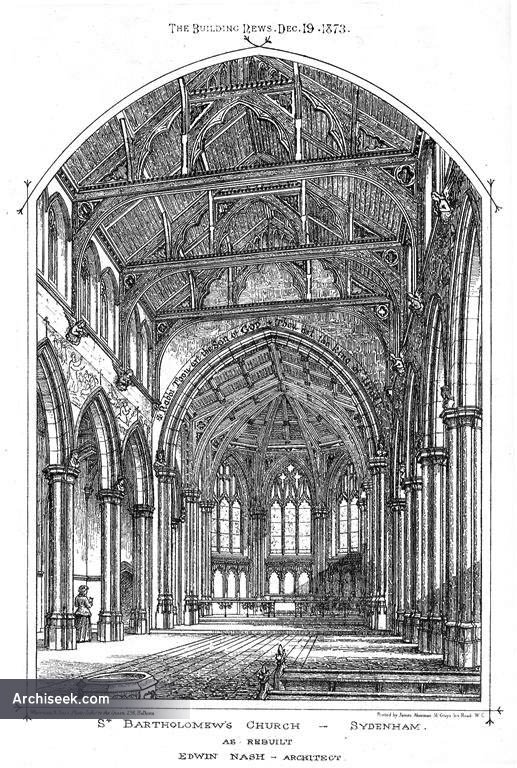 Published in The Building News, December 19 1873: “We give an interior view of this edifice. The short history of the church is peculiar; it was erected in 1831-1832, when the Gothic revival was in its cradle. “Rickman’s Attempt,” “Pugin’s Examples,” and a few other books were being published side by side with works on Grecian architecture, and this building, with a few others, were coming out of the ground with a meagre growth; in fact, the art of Medieval design had not yet got out of its archaeological accidence, and really excellent churches were not raised for some years after. The architect of this church was Mr. Lewis Vulliamy — and, considering the lights of the day, he did his work very well — and the church continued to be used up to tho year 1850 without alteration, though, for some time previous to this, its cardboard-like construction, and the absence of any chancel, had offended the eyes of the late vicar, Mr. English, and several others, and a resolute determination was come to that a chancel should be added, and that the nave and aisles should be remodelled. Sufficient money was then raised to construct the chancel, and it was erected in 1857, from the designs of Mr. Edwin Nash ; but the funds could not be raised for further operations, and so the matter rested until 1872, when the present vicar, the Hon. and Rev. Augustus Logge, stirred the subject again, and the whole of the interior, embracing new columns and arcades, and clerestory, and new roofs, are now in process of erection, from Mr. Nash’s designs. An enlargement, by the addition of a second north aisle, has been aimed at ; but the funds do not suffice for that, nor for such a remodelling of the exterior as tho architect desires. The style is of the fifteenth-century type. The carving will be by Mr. Jaquet. The contractor is Mr. Deards.