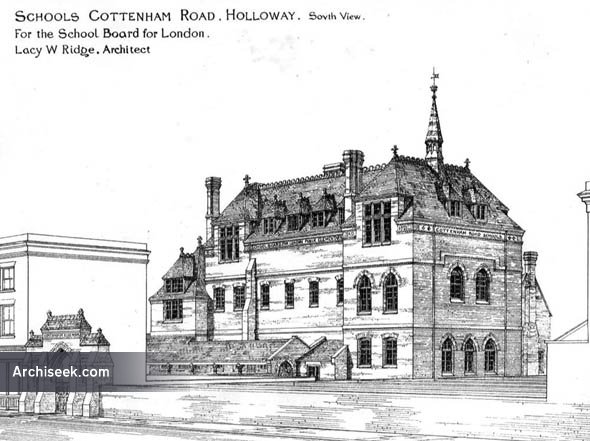 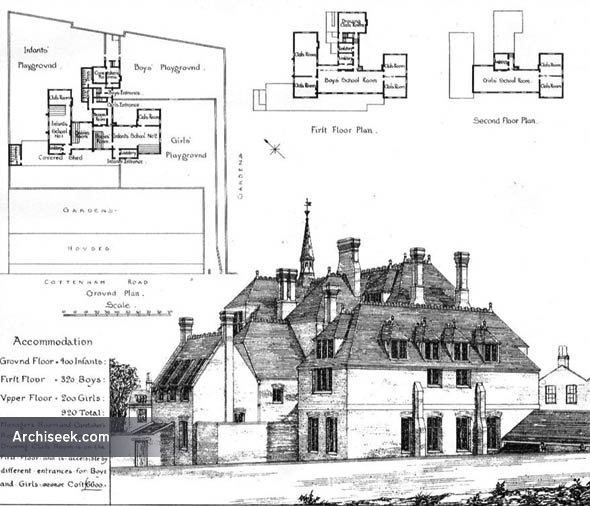 From The Building News, November 28 1873: “The School Board for London have erected one of their new schools on a site situated between tho Cottenham-road and the Hornsey-road, Holloway, near the Hornsey-road Station. The building is three stories in height, and gives accommodation for a total number of 1120 children. The infants are placed on the ground-floor, in two distinct schools, each intended for 2OO infants. Attached to each infants’ department is a babies’ room for the very young children, and a class-room, in which some of the elder infants will be trained preparatory to their being passed to the upper schools. A committee or masters’ room, and rooms for tho caretaker, are also provided on the ground floor. The first floor gives accommodation for 320 boys, in rooms which are all capable of being placed under one supervision, but which lend themselves easily to a subdivision of the school into upper and lower departments. For tho former, which will necessarily contain the smaller number of children, a school, or double classroom, with a single classroom attached, is provided, while, for tho lower department, the large schoolroom and two classrooms, divided by movable partitions, are available. With a view to this arrangement, the cloakrooms are provided in duplicate. A drawing classroom, accessible by different entrances, for boys and girls, is placed on the first floor. On the upper floor is provision for 200 girls. Tho rooms are to be warmed by open stoves, in which fireclay is used to intensify the heat and to radiate it through the rooms. Warmed fresh air will also be passed into the rooms when the fires are lighted. Great attention has been given to the positions of the windows throughout the building, so as to secure a distribution of light appropriate for its special purpose. As the building has no frontage to a street, but is, or will hereafter be, enclosed on all sides by houses, the architect has been compelled to trust entirely to picturesque grouping for architectural effect, his work being but seldom visible, except over the not very high houses of the adjoining neighbourhood. The works, which have cost about £6,600, have been carried out by Messrs. Scrivener and White, builders, under the direction of the architect, Mr. Lacy W. Ridge, of 23, Bedford-row “