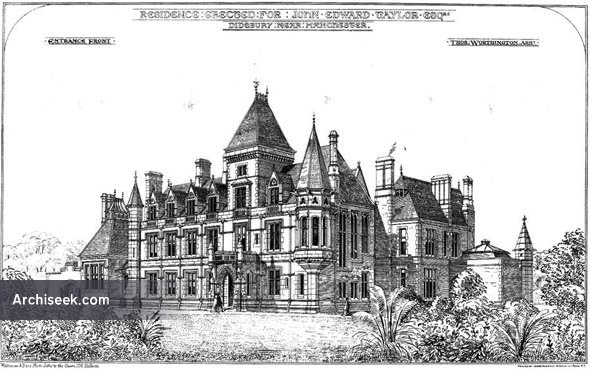 Designed for John Edward Taylor, owner of the Manchester Guardian, but sold in 1874 to the engineer, Daniel Adamson. Built in a form of Germanic Gothic, with lavish materials including carvings and stained glass. The decision to build the Manchester Ship Canal was taken in the drawing room of the house by Adamson and a group of associates in 1882. The architectural historian Sir Nikolaus Pevsner called it “the grandest of all Manchester mansions”. It was popularly known after it was built as the ‘Calendar House’ since it was said to have 12 towers, 52 rooms and 365 windows.

The house and its estate were bought in 1920 for the use of the newly established British Cotton Industry Research Association. Purpose built laboratories were subsequently opened on the site. Even though much of the fourteen and a half acre estate has been developed as a business park with some striking modern architecture, the BCIRA’s successor, the British Textile Technology Group, still retains a presence.

Published in The Building News, August 29 1873: “A MANSION, of which we give illustrations this week, has been recently erected for J.E. Taylor. Esq.. at Didsbury, about five miles to the south of Manchester. It stands on a small estate of some twenty acres, and at a little distance from, though, within sight of, the high road. Externally the materials employed are the light-coloured Darley Dale stone, and bricks of a rich deep red, which form a very happy combination of colour. The workmanship throughout is very excellent, and some portion of the carving, which is by Earp. of London, is admirable. Internally, it consists of a largo block containing the principal rooms, and a wing containing the offices, each division being grouped along a corridor.

The entrance porch is at the north side, under the tower, and gives access immediately to a spacious vestibule 10ft. wide, which leads to an inner and outer hall, together 38ft. 6in. x 2lft. 6in. From this opens to the north a wide open oak staircase, 6ft. wide, with richly carved newels and balusters, lighted by three largo and lofty two-light windows from the garden-front, and itself lighting the vestibule by means of arched openings with marble columns and carved caps.

To the west of the hall is the library, 24ft. Oin. X I5ft. 3in., with an arched recess, 13ft. Oin., X Gft. Oin., and to the east the dining-room, 30ft. x 20ft,, lighted by two three- light windows at the other side. To the south is the drawing-room suite, opening on to the terrace and garden, and consisting of, first, the boudoir, divided from the rest by the garden entrance ; second, the morning-room, with a large octagonal bay-window at the corner, commanding the adjacent grounds ; third, the drawing-room. 32ft. x 20ft., with a large four-light window, and an ample bay-window recess ; and fourth, the art cabinet, combined with the drawing-room by an archway and folding-doors. The art-cabinet is lighted from the roof on the plan adopted at S. Kensington as most effectual for the display of pictures and statuary. The joiners’ work of the dining and drawing-rooms and art-cabinet is of the choicest wainscot, and that of the morning-room of selected pitch-pine French-polished.

The corridor leading to the kitchen department joins the vestibule. On the left are the store-room, housekeeper’s-room, servants’-hall, servants’ entrance, scullery, and kitchen, 20ft. by 16ft, all looking to the entrance-front ; the last has a lofty hipped roof and ventilator, which allows a height of 23ft., thus avoiding tho accumulation of vapours and the inconvenienco of excessive heat. To tho right of the corridor are china-closet, 6ft. 6in. wide; plate- safes, 7ft. 6in. by 5ft., surrounded by l5in cavity walls and a strong iron door ; serving- room, and passage of communication with dining- room (at the opposite end to the door, giving access from the drawing-room); butler’s pantry, 17ft. by l1ft. 6in. ; servants’ staircase, and a verv lofty and spacious cook’s pantry, 25ft. by l1ft. 6in., with flaggod floor and shelves at the sides, lighted by high lights from the outside, and communicating similarly with tho corridor on the inside.

At this end of the building are placed tho domestic outbuildings, opening on a flagged yard, which is connected with the corridor by a flight of steps, and with the drive by a lofty arched gateway.

On the first floor, opening from the grand staircase, is a spacious corridor and landing (over the vestibule and hall) with large roof-light above, which gives access, by an ante, to Mr. and Mrs. Taylor’s bedroom, furnished with dressing-rooms, bathrooms, wardrobe, &c., and to largo spare-rooms, all with ceilings richly moulded in plaster. There are likewise a lady’s-maid’s room near at band, a spacious nursery, bathroom (10ft. by 10ft) under the tower, a linen-closet, and Mr. Taylor’s study in the north-west angle of the building, opening on to the octagonal turret. Over the servants’ department, with which it is connected by a circular stair at the north-east angle, are a housemaid’s closet and bachelors’ and servants’ bedrooms, chiefly opening on to the north front.

The second floor chiefly consists of servants’ sleeping-apartments, children’s and unappropriated rooms, lumber, &c. ; and in the third floor of the tower is a cistern-chamber, 13ft. 3in. by 10ft., for town’s water. Hot and cold water are laid on to all parts of the house, and the electric system has been adopted for bells.

The basement story is made flre-proof, with arched brick ceiling throughout, and is sufficiently well lighted in parts to be capable of use for domestic purposes. To tho north-west of the house is the parterre, tastefully laid out, and, beyond that, extensive greanhouses, hothouses, &c., with their appurtenances. The house has been built by Messrs. T. Clay and Sons, contractors, of Manchester, from the designs, and under the direction of, Mr. Thos. Worthington, architect, of Manchester and London.

We intend, before long, to give a sheet or two of details of some portions of this building.”