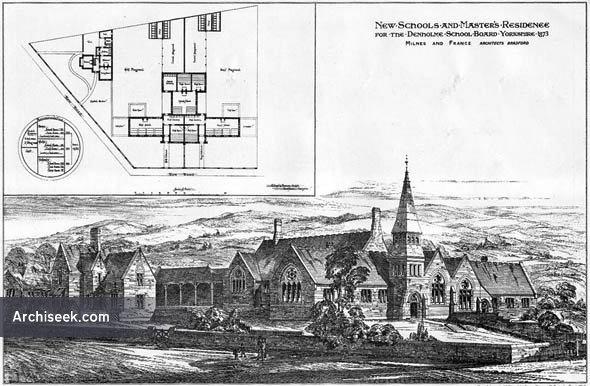 Perspective view including plans as published in The Building News, October 10th 1873. “The designs of Messrs. Milnes and France, architects, of Bradford, were selected in a limited competition. The schools are intended to accommodate 120 boys, 120 girls, and about 200 infants. The boys and girls’ schoolroom are each 40ft. by 20ft., each having one classroom 20ft. by 16ft. The infants’ school will be 33ft., by 30ft., having two classrooms each 20ft. by 16ft. A cloakroom and lavatory is provided to each department. The girls’ and infants’ playground will be joint, and a covered shed is provided for use in bad weather, as also one for the boys. The master’s house will consist of a parlour, kitchen, scullery, and three bedrooms, with other necessary adjuncts. The building will be erected of local delfstone, with sandstone ashlar dressings. The roof will be open-timbered, and all the fittings of deal, stained and varnished. Strict economy is expected to be exorcised throughout. The works are not yet commenced, but excpected to do so shortly, and no accurate estimate of the cost has been submitted, in consequence of the very unsettled and unsatisfactory state of the building trade in the district. The demand for good building-stone has for a considerable period boon so great that quarrymen and workmen have had thorough control of the markets, and it has fetched prices which were never before heard of. A slackness in the building trade, which is rapidly promising, will doubtless reduce building material to something like its fair normal value again. The schools are to be placed near to the centre of the village, and in close proximity to the site of the proposed railway station on the Groat Northern Company’s now lino from Bradford and Halifax to Keighley.

Most of the villagers are operatives in the various worsted factories, the largest of which (that of Messrs. W. and H. Foster) employs from 2,000 to 3,000 hands. There are also numerous quarries of excellent sandstone and flagstone in the district, overlying the outcrop of the yorkshire coal measures, the Halifax beds of coal being now worked at Denholme.

Messrs. Milnes and France have also instructions to erect another block of schools for the same Board for 200 children, to be built at Denholme Gate, the designs for which were also selected in competition.