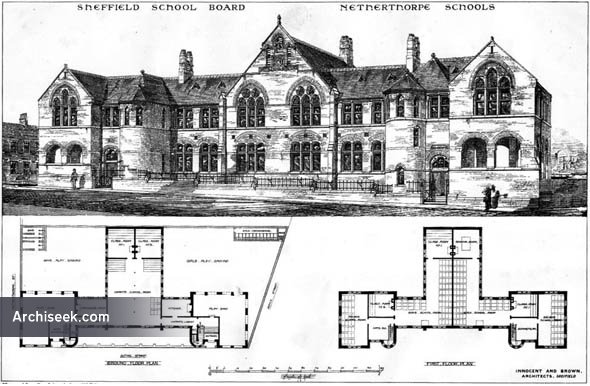 Published in The Building News, October 24, 1873: “One of our sheets of illustrations is a view of the school, with plans of the principal floors, just completed at Netherthorpo for the Sheffield School Board. The ground floor contains infants’ schoolroom, 40ft. lOin. wide, for 258 scholars, two classrooms, each for 50 infants, manager’s room, kitchen, cloak-room, lavatories, teachers’ w.c.’s, and the entrances, the infants’ department being accessible from both the boys’ and gills’ lobbies. On the first floor, entirely separate from each other, are the divisions for boys and girls ; each of these divisions having school-rooms L-shaped, 20ft. wide, for 135 scholars, large class-room, or second schoolroom for 80 senior scholars, and two other classrooms for 45 and 34 respectively. The play-grounds have covered play-sheds, and Macfarlane’s sanitary appliances. The style of building is plainly shown by the illustration, and the other fourteen schools in course of erection in Sheffield are in the same style and kind of building. The outside walls are all of coursed stone, with dressings of ashlar, from the well-known Greneside quarries. Pitch pine is used through- out the interior ; tho walls are boarded up to window cills in all the schools, classrooms, staircases, and lobbies ; the upper parts of the windows open with cords and pulleys, the floors of rooms are laid with pine grooved and tongued boarding ; tho lobby floors and stops are of stone. In the lighting of the building, special care has boon taken to obtain front and side light to tho desks, and side light to tho galleries. In the ventilatiou the flues and grates are arranged to produce as nearly as desirable a self-acting operation, but while the air must be changed, tho quantity of fresh air admitted can be regulated by the teacher. In the warming, the classrooms have open fireplaces, and the schoolrooms are heated by Perkins’s patent hot-water system, applied by Mr. R. R. Gibbs, of Liverpool. One of tho class- rooms on the girls’ side is fitted up as a sewing- room. The desks used are those known as Moss’s patent, being an improvement upon tho Continental system of seating tho scholars in pairs, patented by J. F. Moss, Esq., the clerk to tho Sheffield School Board, with standards designed by Messrs. Innocent and Brown, as selected by the London School Board in their open competition for designs for desks. Tho admirable plan of glazing the upper panels of internal doors has been adopted, so that every apartment can be easily overlooked by the head teacher. The cost of the building is £5,106.5, including water supply, palisading, boundary walling, asphalting, stove grates, &c. The general contractors are Messrs. Thomas Sharp and Son, of Sheffield, and the entire work reflects great credit upon them. Mr. William Dickenson is clerk of works, and Messrs. Innocent and Brown, Sheffield, are the architects.

The building operations of tho Sheffield School Board wore commenced at an early date, and schools have been erected at Newhall, Broomhill, Netherthorpe, and Philadelphia. Eleven other schools are now building, and we may congratulate tho Board upon their promptness in proceeding to remove tho “deficiency” of accommodation, and upon the manner in which they have proceeded to do so, as we have been informed that every site and building plan which they have submitted has been approved by the Education Department.