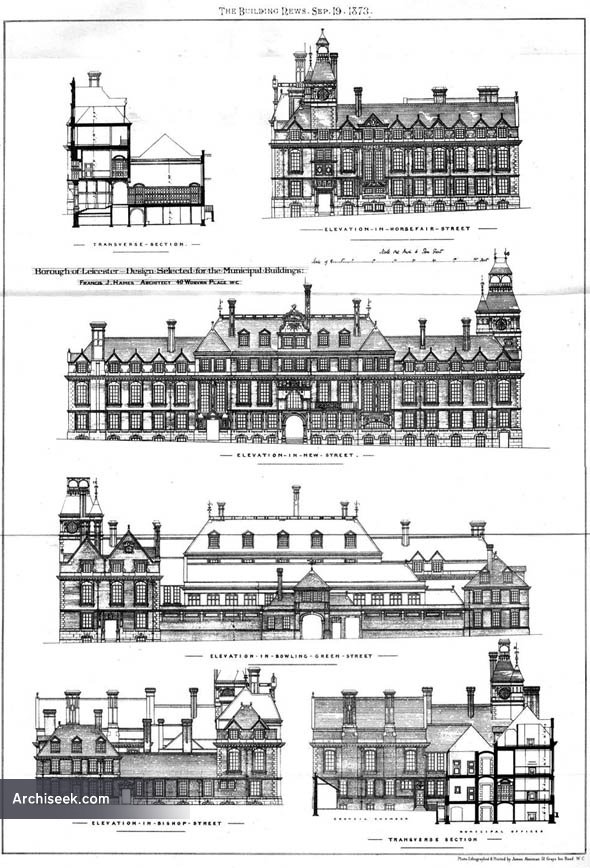 “We are enabled to give in our impression to- day illustrations of the selected design for the municipal buildings, Leicester. The competitions for this work have been somewhat remarkable. In the first competition it will be remembered Mr. Street, the referee, reported in favour of the design submitted by Mr. E W. Godwin which we gave in the Building News. Certain difficulties presented themselves, and disputes arose, and it was decided to have another competition. This time Mr. T.H. Wyatt, the late President of the Royal Institute of Architects, was chosen as the referee. After his report was well considered, the committee , selected the design contributed by Mr. Francis J. Hames, of which we now give elevations, transverse sections, and plans.

The following is the description which accompanied Mr. Hames’s plan: I purpose describing the several departments in the following order, viz., Law, Municipal, and Police.

LAW.
The law entrance is from the New-street, and leads straight into the barristers’ corridor, out of which is the judges’ retiring-room, on a level and communicating directly with the bench. Separated only by the corridor from the Borough Court is the barristers’ retiring-room, and a lavatory leading there from. Adjoining this room is the consultation room. The magistrates’ entrance to Borough Court is close to the magistrates’ retiring-room, which fronts Bishop-street. Out of the law entrance rises the grand jury stair into corridor on first-floor to grand jury room. The communication with clerk in the Borough Court is from the door in corridor. The jury retiring-room is on a level with and has a door straight into jury-box— a very desirable arrangement. The clerk’s room is easily accessible from the Borough Court and New-street. The Press, entering court direct from corridor, are accommodated with benches in courts opposite witness-box and next jury, thus enabling them to hear perfectly. The grand jury witnesses are provided with a waiting-room contiguous the grand jury room. The male and female witnesses’ rooms on either side public entrance, and central between the two courts, have easy access to either. A gallery in courts is set aside for the witnesses to place them in readiness for examination. The public entrance, as required by the instructions, is in the centre of New-street, leading into a space or hall for their use, not too large, provided all round with seats. This hall divides the two courts, but is distinctly cut off from the law and municipal corridors by glass screens. The public are provided with w.c ‘s attached thereto ; and the approaches to courts are through lobbies, to insure perfect quietness in the courts, which cannot be obtained by single doors. The situation of the Borough Court in rear of other buildings insures it against noise. The arrangement as regards the bench, bar, jury, reporters, witnesses, public, and dock, have been very carefully planned from an inspection of the most convenient law courts in England. The court is perfectly lighted, ventilated, and lighted. The gallery is reached by a stair from the public hall, and easily held at command when the gallery is full. The remarks as to Borough Court apply to the additional room to be used as court. Of course the arrangement is in accordance with the requirements of a magistrate’s court, and it has a prisoner’s entrance from parade ground. This court is easily accessible from the mayor’s rooms on first ^9’~>T. The magistrates’ clerk s room adjoins the additional court. This room is not required by the instructions, but as it is essential I have provided for it.

MUNICIPAL.
The principal municipal entrance is from the comer of Horsefair and the New-street, and thus no chishing can possibly occur between the idlers so certain to congregate in the vicinity of courts, and those having business to perform. The councillors’ entrance is from Bowling-green-street. The councillors are also provided wiLh a private stair to council-chamber. The mayor’s private room on first floor adjoins the council-chamber and mayor’s parlour, and is easily accessible by councillors’ stair with additional room on ground floor. The mayor’s parlour with lobby at entrance and adjoining council chamber is deeigned with wall space to hang the pictures in the old parlour. The councillors have a private cloak-room on first floor. Passing through the lobby they enter the council- chamber, which has only a small street frontage, and therefore will be free from noise. The councillors’ department is quite free from the public, ard the access to gallery in council-chamber is b}’ a separate stair from municipal corridor. The only committee-room required by the instructions is contiguous the borough surveyor’s office on ground floor. On the first floor is a spare room, planned and admirably situated for an additional committee room. On the first floor are the town clerk’s offices. His private office communicates directly with the council-chamber and his clerk. His clerk has the strong room, which is divided into inner and outer rooms for obvious advantages, entirely under his control. The town clerk’s general office is conveniently” near the municipal stair and the town clerk’s office. The School-Board rooms on first floor are accessible either by the municipal or grand jury stair, but separate from the municipal and law departments. On the ground floor are the three borough surveyor’s offices contiguous. The accountant’s offices on the ground floor adjoin the municipal entrance. The strong room is under the one on first floor, and similar ; and all the strimg rooms being over one another, and the entrance to them from the various offices, makes them effectually strong. The pay-room, conveniently placed as a waiting-room to the whole of the municipal department, adjoins the borough accountant’s office, and the labourers are paid through a hatch in same. In the basement is the labourers’ waitingroom, reached by the external entrance to basement at corner of the New and Horsefair-streets, or from the Parade-ground. The labourers ascend the stair to pay-room, receive their money, and pass out into the parade-ground and Horsefair-street, or vice versa. The hall porter’s office, placed at the public entrance in New-street, is in the centre of all the departments. The hall keeper’s rooms on second-floor front Horsefair-street. In the basement are rooms proposed to be used as kitchens necessary to municipal buildings. The lift is convenient for taking coals from the basement to the upper floors. On the first floor are two spare rooms, and all the offices on second floor are unappropriated, also several in the basement.

POLICE.
The police entrance is placed in Bishop -street, to prevent the excitement attending arrested persons interfering with the entrances to the principal departments. The chief constable’s house, at corner of Bishop and Bowling-green-streets, is in accordance with the instructions. The stair to police department in basement is from the police entrance, both wide and easy going. The chief constable’s office in basement contiguous the police office and strong room. I have planned the charge office on the ground floor at police entrance for self -evident reasons. There is provided an inspectors’ and detectives’ room, not required by your instructions, but necessary in as much as the inspectors and detectives cannot mix with the other members of the force. From the large muster-room is a stair into parade-ground, and one into dock of court above. The store, lamp, and cleaning rooms are in accordance with the requirements. A drying closet is also provided. The cells lead out of muster- room, and are particularly well lighted and ventilated by a wide and dry area in the parade-ground.

The parade-ground is a square plot containing 700 square yards, with spacious drill-sheds next Bowling-green-street. The fire offices are planned from an inspection of the most improved metropolitan stations. Provision is made for public urinals in Bowling-green-street instead of those now existing in Horsefair-street. On each floor are proper lavatories and w.c.’s — private ones being attached to the principal rooms. Provision is made for a heating- chamber in basement, with stair from parade-ground for stoker. All the coal-shoots are in the parade-ground, to remedy the nuisance of coal being; thrown down in the streets. Hydrants are placed, in all the principal corridors, to be ready in case of fire. “