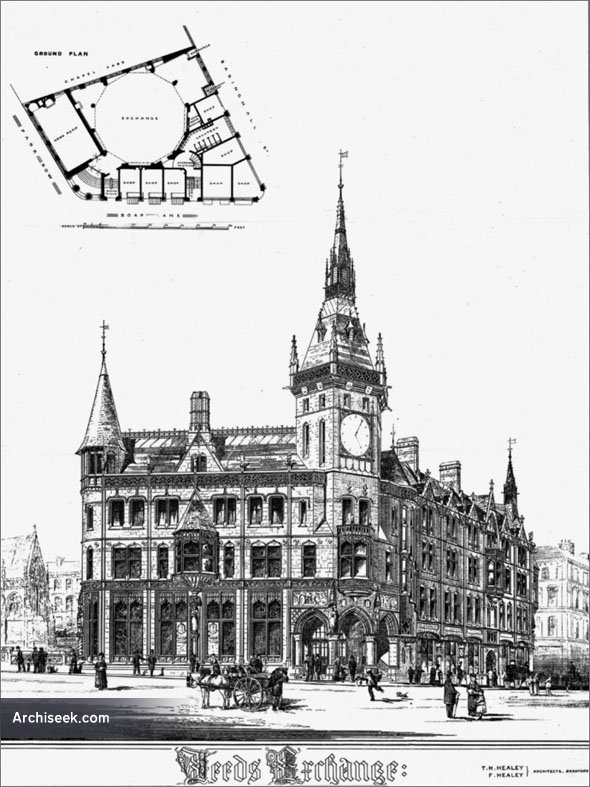 Perspective View including plan published in The Building News October 17th 1873. “This building, the foundation-stone of which was laid by Prince Arthur last autumn, is in course of construction on a site at the junction of Boar-lane with Park-row, formerly occupied by the old Commercial-buildings, which have been removed by the Corporation in pursuance of their schemes of street improvement. The exchange-room occupies the centre of tho block, the frontage towards Boar-lane and Basinghall-street being devoted to shops and offices, and the side towards Park-row to the news-room, over which provision is made for a club. The Exchange in plan is a duodecagon, 6Oft. in diameter, with irregular projections. An arcade of stone pillars and arches carries an arched roof of timber, moulded and formed into panels, and supported by iron bindings, the centre portion being formed into a lantern. A tiled dado is to be carried round the room, and the remainder of the walls will be lined with cleansed ashlar. The floors are intended to be of pitch pine and oak, laid in simple patterns. In addition to the hot-air apparatus, the room will have open fireplaces. Large windows, with tracery heads, towards the Chapel-yard, and the lantern in tho roof, will render the room unusually light. The news-room is 44ft. by 24ft. and 17ft. in height, and provision will be made for adding it to the Exchange, should increased accommodation be required. The basement is lofty, and has been arranged for a restaurant, with entrances from Boar-lane and Basinghall-street. It will be well lighted by large windows into the area next the chapel yard, and will have all the necessary adjuncts for a first-class restaurant. The principal entrance to tho building is through the tower, which in its upper stages takes a hexagonal form, rising to a height of 118ft. from the ground, and will contain a clock. The building is being constructed externally of Brunthwaite ashlar, and of Hare Hill stone internally. The cost will be rather under £20.000.”