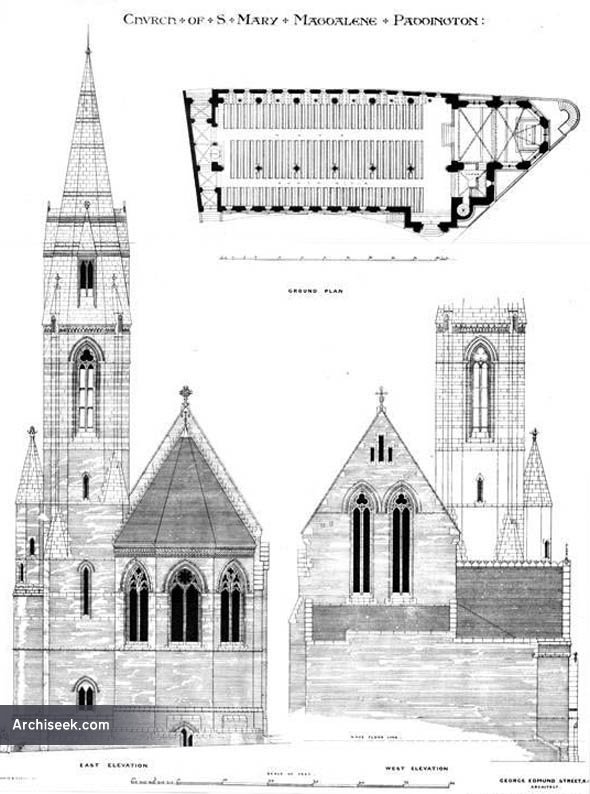 Its surrounding streets have long been demolished and it is difficult to imagine that this tall building was actually squeezed into a narrow site. In the 1960s the community that the church served was swept away in slum clearance after wartime bombing. Widely recognized as George Edmund Street’s masterpiece in London, construction started in 1867, and was complete in 1872, but a fire destroyed the brand new roof and the reconstruction took a year.

The church is immensely high, with a needle spire, which rose above the rooftops. Clerestory windows ensured that it was light. The irregular west end abutted existing buildings, and the church occupies every inch of the available site, except for a sunken area to access the vestries. The Building Act forbade building above a certain height right up against a pavement, but allowed it five feet back, so on the north side Street built a “false” aisle, five feet wide, with the arcade carrying the church to its full height. On the south side there is a normal, wide aisle. Under the church, to provide a level platform, is a massive crypt, including vestries at the east end. Street’s artistry was to provide a double arcade to the north aisle which takes the eye away from the proximity of the outside wall and conceals a slight curve in it.