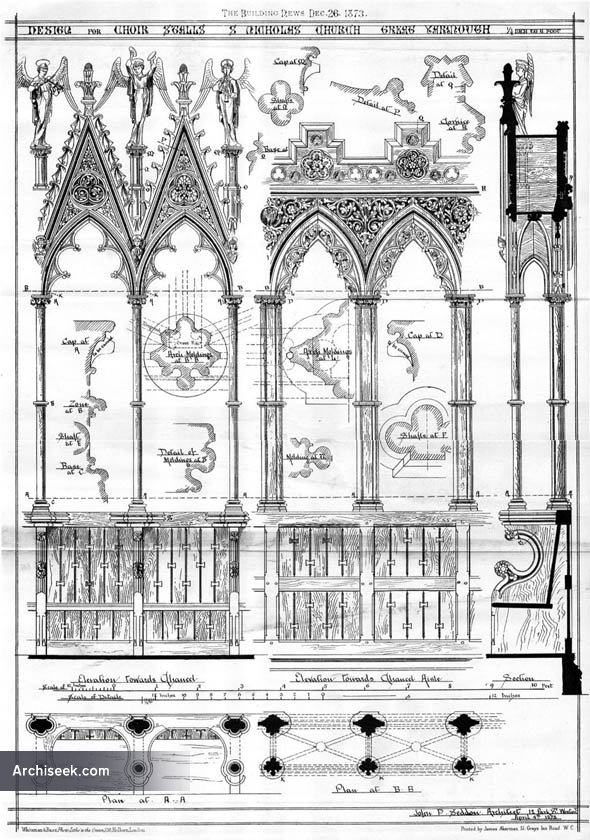 Published in The Building News, December 26 1873: “The double page of details and single page perspective illustrations given, are from the drawings exhibited by Mr. J.P. Seddon, in the Royal Academy Exhibition during the present year. They represent the stalls on the south side of the chancel of S. Nicholas Church, Great Yarmouth. A portion only of the canopies of about six bays has as yet been executed, together with the whole of tho stalls, choristers’ seats, and book-boards, through the exertions of the vicar, the Rev. H.R. Nevill. They are in oak. In consequence of tho wide chancel aisles being constantly used by the congregation, it was considered necessary that neither sight nor sound should be obstructed, as usually is the case by stall-work, the backs of the canopies of which are ordinarily filled in, while the alternative plan adopted we believe in the ancient stalls of Beverley Minster, of making both sides correspond, and supporting the canopies on a single column, at back as well as in front, appeared to the architect to lack the requisite appearance of stability. He has, therefore, placed a group of clustered columns behind, with a single column in front, and given a connecting enrichment to the cusping of the arches at the back to ensure greater apparent solidity. It also appeared to him that the pedimontal form of the canopies repeated behind as in front, with or without the same finials and crockets, was unsatisfactory from the want of a background to the view in perspective from the chancel side, and uninteresting from that of the aisles. 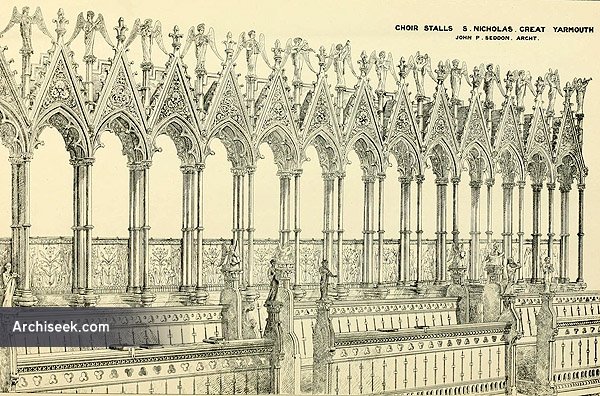 Our illustration of the details shows the method adopted of meeting this difficulty. The figure of an angel is placed on a pedestal formed of a group of shafts set in the hollow between each pair of pediments, and these pedestals and figures are set somewhat hack from the general line of pediments in front, to source a second plane of decoration. Velvet curtains, embroidered with lilies, are placed as a shelter behind each stall, removable when needed. The chancel flooring between the stalls is laid with encaustic tiles, the designs for which were made by Mr. Seddon from various water-plants. In the perspective view is also shown a part of the suggested chancel-screen, in character with the stalls, with a double plane of tracery and two tiers of figures of angels between tho pediments. On tho wall-space above the stalls are shown parts of the polychromatic decoration tho architect proposes ultimately to carry out, consisting of a panel with sacred subjects painted on it, with rich borders of ornamental scrollwork and diapers. The number of tho stalls on each side of the chancel will be fourteen when tho whole are executed and fixed, as it is hoped will soon be the case. “