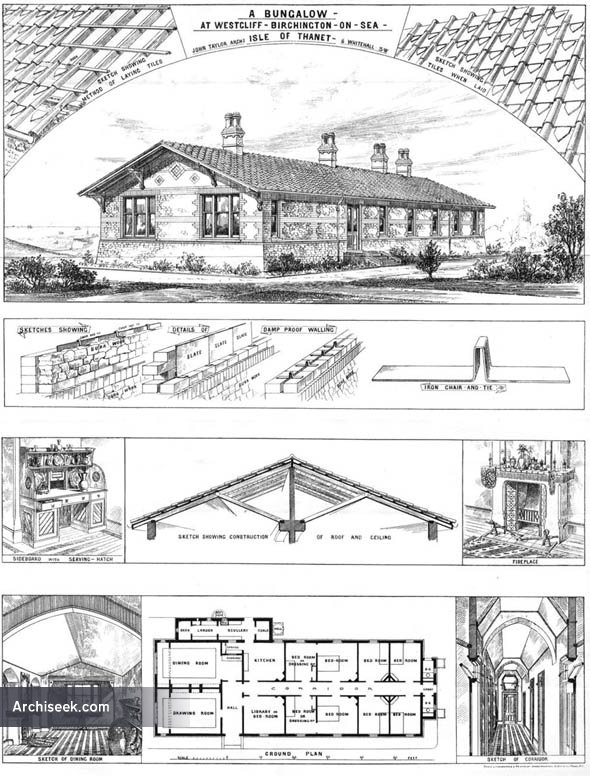 From The Building News, August 15 1873: “It is very difficult in these days to hit upon a new and successful idea. Mr. John Taylor, of 6, Whitehall, has, however, unquestionably done so in his “Bungalow” residences that he has for some time been engaged in erecting in tho neighbourhood of Margate, and illustrated in the present number of this journal. In an article upon recent buildings in the Isle of Thanet, given in The Building News some time since, attention was called to these buildings, .and it was remarked that it was a pleasure to see such rescued from tho hands of speculating builders and made tasteful as well as useful, and that positively without tho addition of anything that could be considered in tho nature of ornament.

Professor Erasmus Wilson, who was one of the earliest purchasers of some of Mr. Taylor’s Bungalows, thus speaks of them from experience, now of some duration: — ” I find everybody is charmed with my Bungalows, and I believe if there were many Bungalows there would be many buyers. The house is a novelty, very convenient, fitted for a single family, and easy as to price. The idea of Bungalows seems to take people’s minds immensely : they are novel, quaint, and pretty, and perfect as to sanitary qualities. The best sanitary house for a family is a Bungalow.”

Such praise, which we believe to be thoroughly merited, particularly the portion in italics coming from such an authority upon sanitary matters as Professor Erasmus Wilson, will, we doubt not, induce our readers to consider well tho various points which are elucidated in our illustration. We learn from Mr. Taylor that, as far as he is concerned, tho principal advantage that has accrued to him from the undertaking — an advantage which his neighbours have acknowledged they have shared with him — has been by the increased value given to the sites and adjoining land. We shall therefore repeat what we said in the article referred to — that the spots chosen for these operations at West Cliff and Birchington-on-Sea, both near Margate, have nothing between them and the sea, and nothing but sea between them and the North Pole, and must be as bracing as any our island can supply. Mr. Taylor says ho has applied the term “Bungalow” to the residences he has built thereon as being one and two-storied buildings, under one span of roof of the most primitive and simple construction upon the lean-to principle, which practically admits of any span in the manner in which he has applied it. The struts (see sketch showing the construction of roof and ceiling) form one side of the tent-shaped form of all the rooms. The chimney-shafts are carried up in the highest part of the roof, namely, from the ridge. This is a matter of considerable importance, for in such a situation tho wind strikes with such force that in any other position of tho chimneys down-draughts of smoke would be more than probable, whereas, impinging on tho sloped sides, the wind rushes upwards, aiding, by its force so directed, tho exit of the smoke in the most stormy weather.

It is to be noticed that no framing nor roof trusses are required in the construction, but simply common rafters. The roof is kept cool by reason of the common rafters being as deep as tho floor-joists, namely 7in., but only lain, thick, and strutted between. They are ceiled beneath, and covered with asphalted felt, limewhited, and then covered with Mr. Taylor’s well-known patent tiles, which lock one into another, and are easily removed and replaced when repairs are needed. In the manufacture of these tiles, Mr. Taylor has recently effected some considerable improvements over those which are made and sold under his patent by the Broomhall Company, who, somewhat inexcusably, have lately ignored the name of the patentee altogether. These improvements were found to be rendered necessary by the effect of the boisterous winds that prevail in the neighbourhood of which we are speaking during tho winter season. We are told also that the character of the material of these tiles is also much improved.

Tho same simplicity of construction has been carried out in all the different parts of the building, down to the details of its various fittings, and even its furniture. Thus cornices, a modern weakness, are omitted throughout, as also all other ornaments and decorative features, usual even in speculating builders’ erections, and for which no one but the plasterers are ever one whit the better. Nothing, however, really necessary, either for stability, or to insure comfort to the inmates, has been omitted, tho object of Mr. Taylor having been to create novelty by attention to extreme simplicity and adaptability, so generally lost sight of in the over-refinement and finish of tho present day.

The climate of tho locality may truly be said to be Mediterranean in summer, and Arctic in winter ; and to render the walls cool during tho former, and warm in the latter, without increasing their thickness, and to keep out the driving rains, which are literally horizontal, and tho salt sea sprays, has been an object which Mr. Taylor has only just been enabled completely to attain by his “damp-proof walls,” which will prove, we think, as valuable an invention as his well-known one, now generally adopted, of the “damp-proof course,” tho object of which is to prevent wet rising into tho walls from beneath. We call, therefore, special attention to the construction, as shown in our illustration, of these “damp-proof walls.” They are so built that the outer and innerfaces are separated by slates, which overlap each other horizontally and vertically, supported upon ties of iron hooping, which at tho same time, Mr. Taylor considers, bind and connect the two faces of the wall. The outer face is of burrs or clinkers from the brick-yards, knapped, and tho broken or sectional parts placed out- wards. The quoins, reveals, and strings are of gault bricks. The most penetrating rains and salt sprays are found unable to get through these walls, and the temperature within is maintained equable.

As a wise provision for ventilation may be noticed (see interior view of corridor) hinged glazed flaps, easily opening inwards into the several rooms, and at tho end of the corridor a light sash hung upon pivots, allowing it to remain open even during rain. Thus all tho apartments are so well ventilated, and the air so quickly changed, that they have the advantage over larger rooms not so well ventilated, and never have any of that too-well known odour of rooms in which persons have passed tho night.

These Bungalows have gardens and croquet- lawns reaching down to the sea, and communications thence to tho bathing-sands .and private dressing-places. There is also a coach-house and stable to each tenement. They are freehold, furnished and provided with plate, linen, and usual sundries, down even to a corkscrew, and ai-e sold, all such included, at lid. per foot cube. If such Bungalows were built nearer London, w^ believe they would be very greatly prized. “