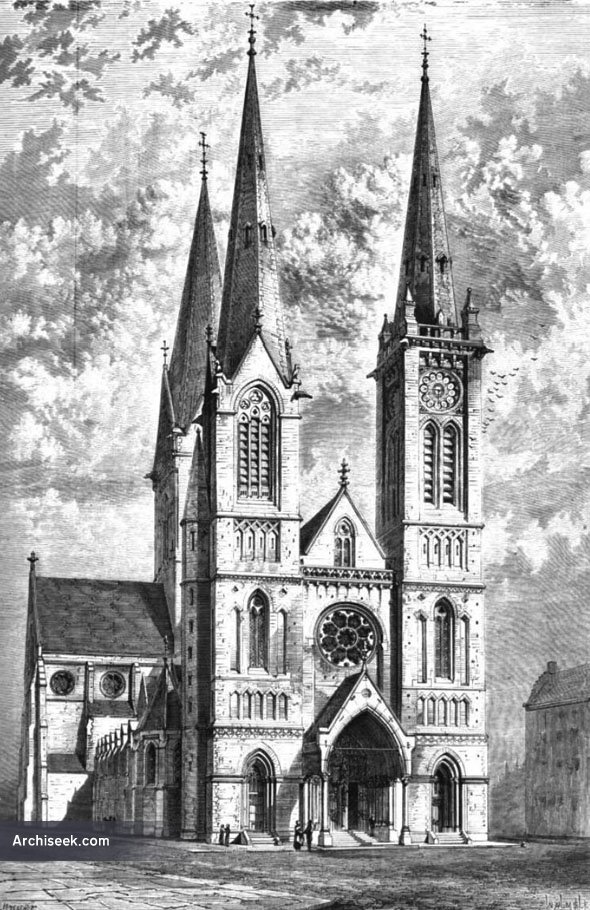 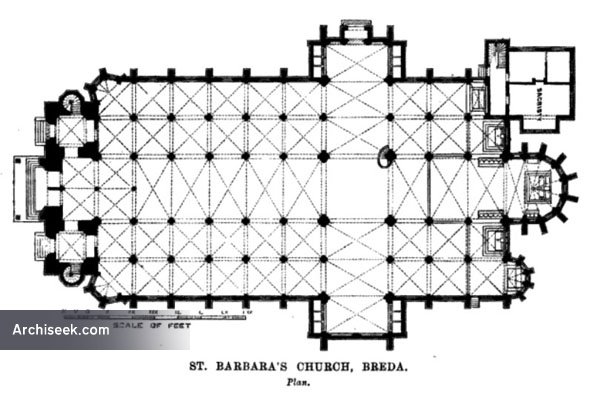 Five-aisled cruciform basilica with round windows in the central aisle. Square tower on the crossing. The towers and spire of the main faced were never completed. Became in 1876 the cathedral of the Breda diocese. Demolished 1969.

From The Builder, January 22, 1870: The new church of St. Barbara, in Breda, the opening of which we noticed in the Builder, vol. xxvii., p. 691, is one of the most remarkable examples of the revival of ecclesiastical architecture in Holland. The style chosen by the architect, Mr. Cnypers, is First Pointed, of that plain and rather severe kind so common in Belgium and parta of HoUiu.d. ThÂ« plan of the church con sists of a western porch; two western towerr, flanking the nave; a nave of six bays, with four aisles ; transepts, each three bays deep; a choir of three bays, also with double aisles; and a sanctuary of two narrow bays, terminating in a five-sided apse. The east bay of each of the four choir aisles forms a chapel, and has its separate altar. The high altar stands upon the ” chord ” of the great apse. The choir is fitted up with stalls and a rood-screen. There will eventually be three spires, two at the west end and one over the crossing of the nave and transepts ; at present, however, the western towers are only carried up to a level with the apex of the roof of the nave.

The interior of the church is very striking, the whole building being vaulted, and the number of columns and arches seen at once give picturesque perspective effects. A very remarkable feature in the interior of this church is the large triforinm, equal in height to the arcade of the nave. This triforinm is need as a gallery, and extends over the two inner aisles of the nave and chancel. Above this triforium is a clearstory, lighted with rope windows. It seems to us that this clearstory is scarcely important enough for such a lirge church ; however, we must, in justice to the architect, allow that he could point to many ancient examples of churches in the north of Germany, where the clearstory is treated in the same way.

The whole church is built of brick, with the exception of the window-tracery, the columns, strings, Ac., which are carved out of a stone called SawnnieVe. The steps and lintels of the doorways are of Belgian granite. The vaulting is filled in with brick called Ysfelsteen ; the ribs are of stone. The cost of the shell of the building, exclusive of foundations, towers, and all carving or decorative work, was rather less than 15,0001. in English money. Of course, it mast be remembered that materials and time are cheaper in Holland than in England. All the carving, the capitals, sculpture, Ac., were executed in the workshops attached to the architect’s offices at Boermond, and carried out from his own designs and under his direction. The same may be said of the stained glaas and all other decorative portions of the building which could be executed separately.