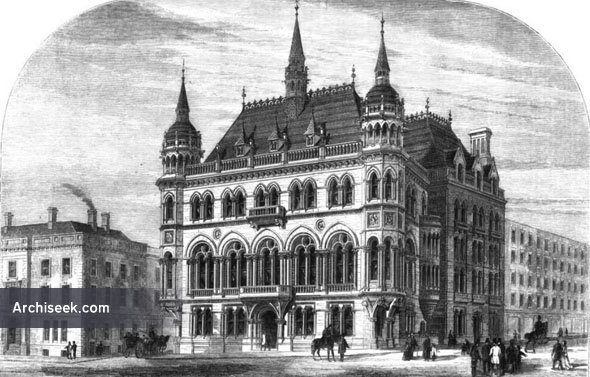 From The Builder: “We give a view of the Club building now in course of erection in Manchester. The basement is to be let as stores, the ground floor as offices, the Club starting from the first floor in approached by a grand central hall and staircase. The hall and ante hall are to be groined and the walls decorated with terracotta and marble columns. The staircase is to be of oak with carved balusters inlaid with various kinds of wood. On the first floor is a large dining room 80 ft long by 32 ft wide with panelled oak, and pitch pine ceiling decorated with gilding. The doors and dado are of carved oak. On the floor are also strangers dining rooms, coffee room & co. The second floor is a large billiard room to hold four full sized tables, card room, smoking room and so forth. The front and side elevations are to be of ashlar work and with polished granite columns red and grey,and different coloured polished marbles. The contract is taken by Mr Nield builder, Manchester for 20,000. The architects are Messers. E. Salomons and J.P. Jones of Manchester and London.”

Manchester Reform Club was established in 1867 as a gentlemen’s club for Liberal politicians and supporters in the Manchester area. The Club’s fortunes parallelled those of the Liberal Party. Faced with declining membership in the 20th century, it merged with the Engineers’ Club in 1967 to form the Manchester Club, which was eventually wound up in 1988.