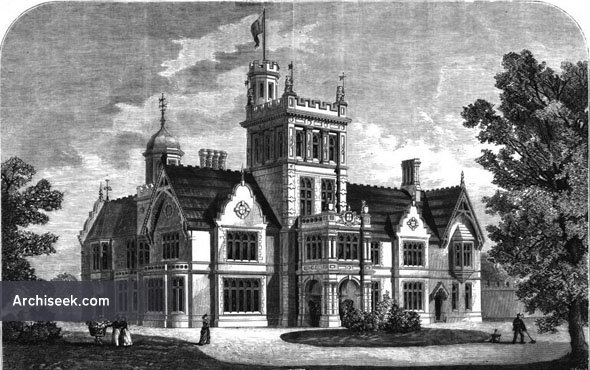 “Kenwood Tower now being erected for Mr Brooke will have the external walls with Loughborough red bricks and rubbed red brick quoins, all the dressings of the and other stonework being of Doulton. The chimney shafts will be of patterns and built up in small moulded supplied by Gumlin of Cassy. They are to be covered with ornamental red dark grey tiles. The dining room will have moulded and carved ceiling in wainscot; also doors and window jambs all of wainscot, moulded on the solid. The floor parquetry; the chimneypieoe will be modelled and carved with various woods and marbles: it be the whole height of the room and worked into the cove of the ceiling. The principal staircaseis to be of wainscot, carved, of design with an open timbered ornamental roof, coloured. The billiard room hall and principal hall will be fitted up with pitch pine of similar design to the dining room. The upper portion of the windows in the ground-floor rooms is to be filled with stained glass supplied by Heaton Butler & Bayne, the to be suitable to each room. There will a stained glass window too on the principal staircase filled in with the armorial bearings the Brooke family; in the hall large stained windows with subjects from well known fables. Polished marble oolumns and carved capitals are used inside, both in staircase, hall, and drawing room. The conservatory and vineries will have an entrance from the dining room.” From The Builder, June 18 1870.