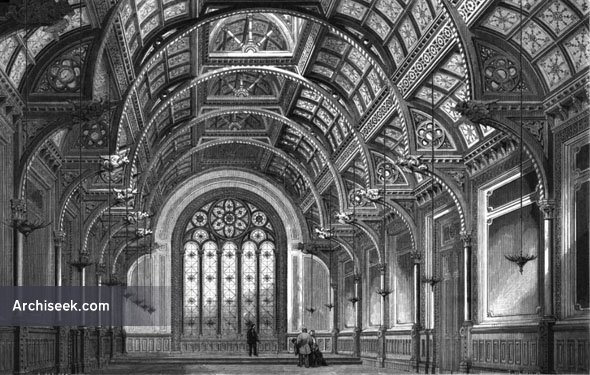 From The Builder, April 16, 1870: This handsome apartment forms the central feature of the block of buildings just completed as the new College at Dulwich of which a general view plan and particulars were given in previous volume of the Builder. The whole those buildings are now complete and have partially in the occupation of the school 250 to 330 boys are at present assembled.

The building when fully occupied has accommodation for 800 and situated as it is close to London and in the midst of a very populous neighbourhood which is ever on the increase there can be no doubt that the full number of scholars will be at once eager to enter so soon as the arrangements of the trustees permit. At present as we have said they do not propose to take more than 300 boys. The hall is on the principal floor of the building and is approached on each side from the ground floor by spacious staircases communicating with the play cloisters of the boys and which connect the north and south wings of the building with the central block. Its length is 92 ft its width 43 ft and its height above 50 ft. There is a raised dais at the eastern end which will be available we presume for those speeches and dramatic recitations which have so agreeably marked the examination prize days of Alleyn’s College during the last few years. The great ribs of the roof are supported on pillars of red Devonshire marble highly polished with richly carved stone capitals and standing on pedestals of terra cotta work in cream colour and light green ware of very finished and beautful manufacture from the works of Mr Blaahfield of Stamford.

A panelled oak dado runs all round the hall between these pedestals while the panels between the pillars are to be gradually filled with the recorded names of scholars of Alleyn’s College who shall have attained distinction in their after studies and their future lives. The great doors each side of the hall leading to the staircase of carved oak are worthy of observation. The hall is lighted by a large mullioned window at each end as seen in our engraving and which is filled with glass relieved by a stained glass bordering while the tracery contains the armorial bearings of the College. These windows have been executed by Mr Moore of the Beckford Glass Works Clerkenwell and the border and other coloured parts are formed from Stamford coloured glass, the ingenious process for doing which has been patented by Mr Moore. The window jambs mullions and tracery are all of terra cotta enriched with modelled carving from Mr Blashneld’s manufactory above mentioned.

The roof of the hall is entirely in deal. Its design is similar in style to the roofs of some of the great churches and basilicas of North Italy that is a wagon form; sometimes found with a single curvature from wall to wall and sometimes as at the great church of St Fermo at Verona of several stages of curvature an idea which has been carried oat at Dulwich. These roofs in Italy however are never divided into bays as at Dulwich and the result is a heaviness of effect which is here relieved by the circular principals springing from hammer beams supported on the marble pillars before referred to. The spandrels of the springers under the hammer beams are filled with the armorial bearings of the College duly emblazoned in colour and the effect of the whole is enhanced by the simple expedient of staining its principal lines of mouldings but leaving the natural colour of the deal in the carved or enriched features the whole then being varnished. From the centre of the roof rises a louvre for about 30 ft above the ridge of the roof intended for ventilation which being treated externally in several stages and terminating with a crocketed spire forms an important and graceful feature of the exterior.

This hall is intended to be used for dining the masters and those boys of the College who may wish to avail themselves of the arrangements about to be made by the trustees for this purpose and with a view to which a complete range of kitchens &o is provided on the lower floor with a double lift thence to the service room on one side of the hall. It is calculated that about 400 can easily dine at the same time though it is doubtful whether so many scholars will wish to do so as of coarse many live with their relatives in close proximity to the College. On the annual prize days 700 to 800 spectators will readily be accommodated a fact which will encourage and reward the exertions which doubtless will be made to vie on these occasions with Westminster Eton Harrow Rugby and Marlborough. We should not omit that the walls and roof have been tastefully decorated in colour and arabesques by Mr Schmidt of Kingsdown Road Islington under the immediate direction of the architect to the governors Mr Charles Barry from whose designs the whole pile of buildings has been carried out .