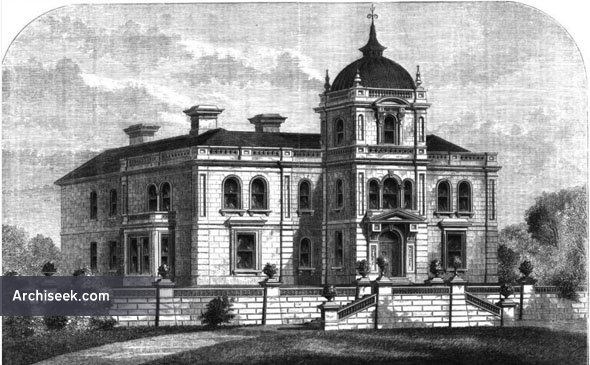 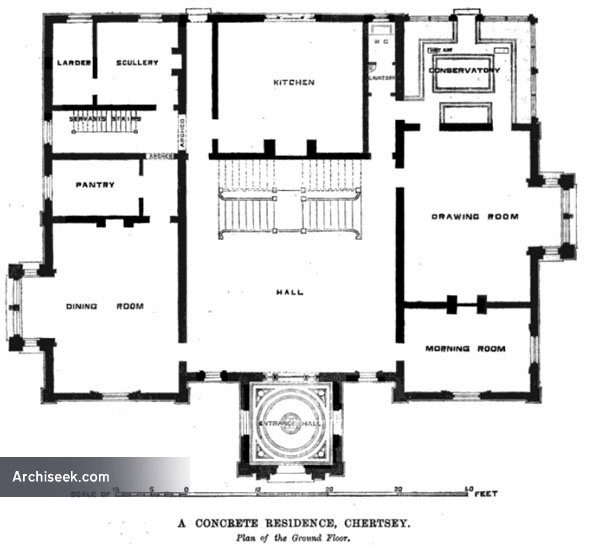 From The Builder, February 12, 1870: The use of Portland cement concrete as a building material goes steadily on. We illustrate in our present number a villa residence of considerable size, the walls of which are entirely constructed of it. This building, known as Ferulands, is nearly completed; it stands on a rising ground, about a mile fromChertsey, Surrey, and forms a somewhat prominent feature in the landscape from the rail, as the town is approached from the London side. The concrete of which it is built is composed of gravel and sand, dag on the spot, and Portland cement, in the proportion of 7 of gravel and sand to 1 of cement. Some portions, such as the terrace walls, are composed of 9J of gravel to 1 of cement, and this latter proportion is found to make a good wall. Hoop iron is used in the walls as a tie.

The apparatus employed in the construction is that patented and manufactured by Messrs. Drake, Brothers, & Reid, of London: it is easily adjusted to any shape or height of wall. The walls were built by the proprietor of the estate, Mr. J. Madooks, who employed his own workmen. The contractor for all other portions was Mr. B. E. Nightingale, of Lambeth.

The building consists of basement, groundfloor, and first and second stories. The large central hall, shown in the plan, is continued up to the roof, with balcony round on first floor, and is lighted by a lantern, somewhat elaborately ornamented with carving, gilding, and stained glass.

There are in all twenty-two rooms, besides conservatory, pantries, and larders. The pilasters (2 ft. on face by 3 in. projection), at each angle of the main building, and of the tower, were built up together with, and form a part of, the walls; and the walls are decreased in thickness on each floor, being 14 in., 12 in., and 10 in. The chimney-breasts, being large on the ground-floor (kitchen fireplace especially so), were reduced in size on the chamber floor, the adjustability of the apparatus allowing variations of this kind to be carried out at will. The pilasters to front doorway and shafts of the windows above it are of stone.

The building is heated by air, warmed by contact with earthenware, conducted mainly through flues formed in the body of the concrete walls, and admitted by sliding valvular gratings in the skirtings of the several rooms.

Ventilation is provided for in every room by distinct fines, formed in the concrete, and entered by apertures near the ceilings. The bells are Moseley’s electric; and the closets are all of Moule’s patent.

The architect considers the construction perfectly successful, and it may be taken as a proof that concrete is a suitable material for buildings of any class or size. With the apparatus used, battering as well as perpendicular walls have been constructed, and we have every reason to believe that with due oare and intelligence, and with good cement, walls of any shape, height, or inclination, can be successfully carried up in this material. Bad concrete is utterly worthless: with good concrete properly applied, sound and economical buildings may be constructed.

The strength of the walls of this building was very satisfactorily demonstrated. During the construction it was determined to form a doorway in one of the inner walls. The concrete was cut away with, a pickaxe to the required size, except in the middle, where a beam of concrete was left, 3 ft. 4 in. long, 9 in. deep, and 9 in. thick. This beam, a perfectly straight one, had along the middle of it one of the horizontal joints which necessarily occur between the layers of the concrete, but no bond of iron hooping. This beam was tested with a weight of 25 owt., hung on its centre. After bearing the strain for twenty-four hours, the foreman jumped on it, but without effect, and it had after this to be demolished with a pickaxe.

The architect is Mr. T. Wonnaoott, of Chertsey.