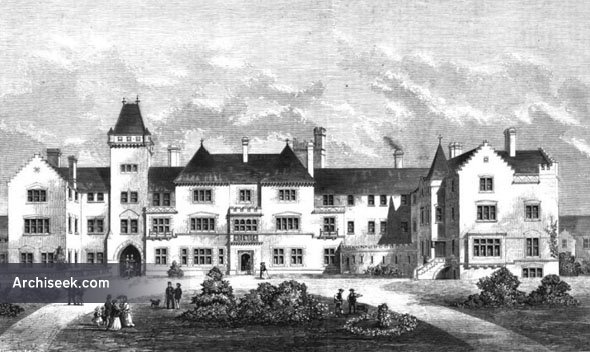 From The Builder, April 2, 1870: THE subject of the accompanying illustration is the newly erected asylum for the reception of the insane poor of the county of Berks and boroughs of Reading and Newbury. The site is favourably situated on the banks of the Thames at Cholsey near to the Moulsford Station on the Great Western Railway. The land slopes gently southwards to the river and is bounded on the north by the turnpike road to Wallingford. The general outline of the plan affords uninterrupted views of the surrounding country free access to sun and air and is so arranged as to give the day rooms a good aspect. There is no road nor building on the south side which is appropriated entirely to the use of the patients and will be laid out for them as gardens and airing grounds. The accommodation for male and female patients is kept quite distinct on either side of the centre and the kitchen and stores are so placed that the service on each side shall also be separate. The working patients who are engaged in the laundry and workshops are placed in the north block the one illustrated in the centre of which are the superintendent’s office porter’s room reception and waiting rooms visiting justices room and steward’s apartments. A residence is provided for the superintendent on the west side of the north block with the front windows commanding the high road and the entrance to the asylum. It is connected by a circular corridor with his office.

The wards for acute and recent cases with a large dining hall form the south block and the infirmaries the east and west wings. They are in a quiet position at a distance from the other wards and where they cannot be used as a thoroughfare to any other part of the establishment. In the centre between the north and south blocks are the administration offices including kitchen, scullery, larders, cellars, stores, dispensary, rooms for servants, engine and boiler house, pump house, laundry, wash houses, and workshops for tailors, matinakers, shoemakers, and others. The day rooms and patients corridors and staircases besides open fireplaces will be warmed by Haden’s hot water apparatus. Rain water will be stored in large tanks and spring water pumped up into cisterns in the tower. All the buildings will be lighted by gas made at works erected for the purpose on the ground.

The estate which covers an area of sixty acres will be laid out and partly cultivated by the patients. The sewage will be applied to the land. There are farm buildings including stabling for horses, cow house, piggeries, root house for and cottages for the farm bailiff and engineer as well as an entrance lodge and cottage adjoining. The patients chapel is at a little distance from the main building so as to give the inmates the opportunity of a walk to and from the services. The nave is 51 ft by 25 ft and the chancel which has a semi circular apse measures 24 ft by 20 ft. The buildings are constructed of red brick work slightly relieved with stone and coloured brick dressings and have been erected by Messrs Mansfield & Price of London under the direction of Mr C.H. Howell of Lancaster place Strand the architect of the New Surrey and East Riding Asylums