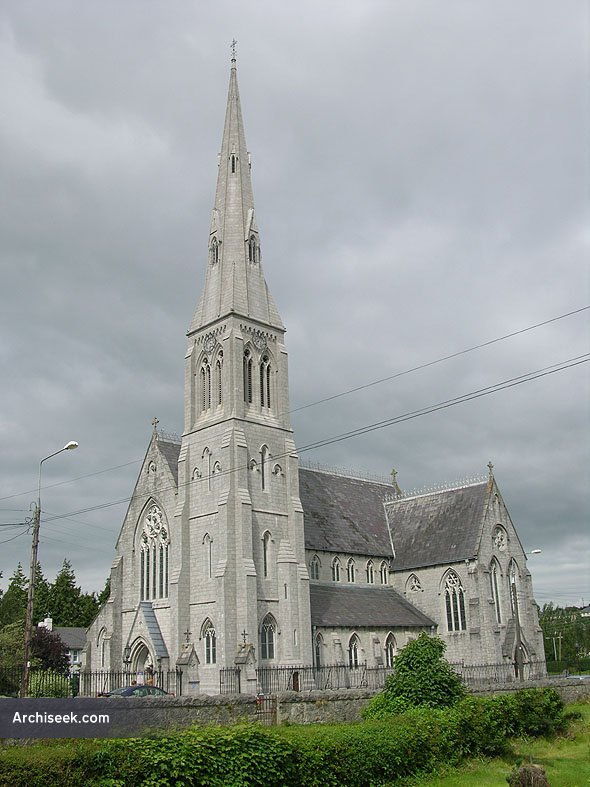 An excellent example of the Gothic revival by J.J. McCarthy, known as the “Irish Pugin”, and who designed many churches across Ireland. Of particular significance in the church are the ten beautiful stained-glass windows which were designed by the renowned artist Harry Clarke in 1925. According to The Irish Builder “The church was begun many years ago, from the plans of the late Mr. J.J. McCarthy, R.H.A., on whose death the task of completing the building was entrusted, to his son, Mr. Charles J. McCarthy, architect, of 12 Westland-row, from whose designs have been executed the high altar and reredos, the side altars, communion rail, baptismal font, organ gallery, and all the other fittings and furniture.”

The Freeman’s Journal described the building at the time of consecration of the high altar — “The magnificent high altar which has just been consecrated to the service of religion, is itself an exquisite specimen of ecclesiastical art. It is composed exclusively of Italian and Irish marbles, and over the tabernacle is a graceful, tapering canopy, supported on six pillars of beautiful Cork red marble. The reredos is of Caen stone and Irish marble, with finely-sculptured groups representing scenes from the life of our Divine Lord. It is flanked by canopied niches, in which stand the statues of St. Joseph and the Blessed Virgin. Both the altar and the reredos are entirely the work of Irish hands, and have been executed in the establishment of Messrs. P.J. O’Neill and Co., whose contract also included the beautiful baptismal font and communion rail, likewise composed of Caen stone and Irish marble. Immediately over the high altar is a large and handsome window, the work of Messrs. Earley and Powell, of Dublin, the eminent artists in stained glass. The figures are well drawn and grouped, and the colours are rich and admirably harmonised. The other improvements in the church are in keeping with the magnificence of the new altar. Messrs. Pearse and Sharpe, Great Brunswick-street; Mr. William Martin, St. Stephen’s-green; Messrs. McGloughlin and Son, Great Brunswick-street; and Messrs. Sibthorpe, were entrusted with other portions of the alterations.”