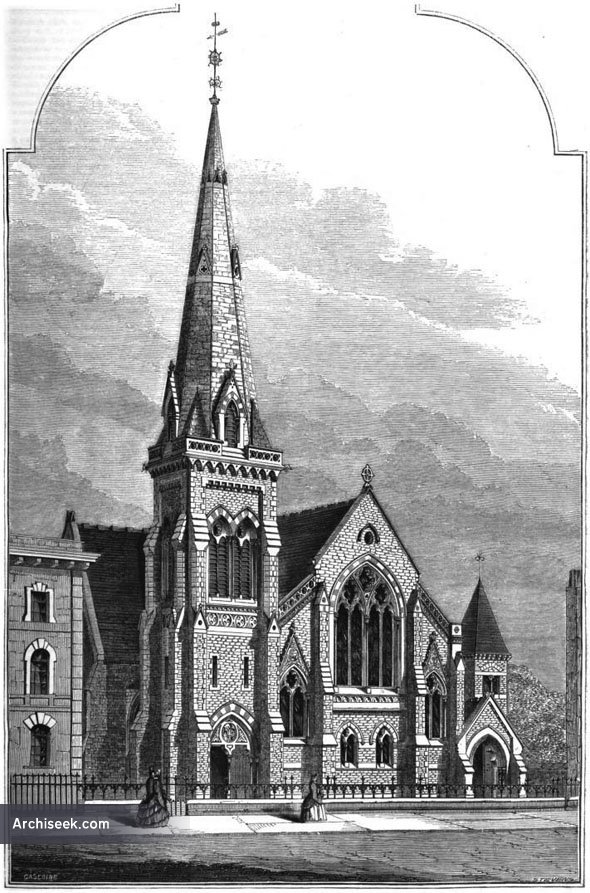 From The Building News, August 29, 1862: Our engraving this week represents the exterior of the fine church just built at Islington for the Unitarians, which was duly opened on the 20th inst. The name of ‘ Unity Church’ has been given to this edifice, and belongs to the congregation which has, up till now, assembled in Carter Lane Chapel. Mr. J.C. Clarke, of Leadenhall Street, was the architect, and Messrs. Axford & Co., of Coleman Street, City, were the contractors.

The church has cost £10,000, of which £6,500 was produced by the sale of the old chapel, and the remainder has been raised by subscription. Carter Lane Chapel dates its existence nearly two hundred years ago, the founder of the congregation being Matthew Sylvester, who is said to have settled in London about the year 1667.

The church is cruciform in plan, with nave, narrow aisles, transepts, and a shallow chancel, or communion recess. It is entered at the western end by lobbies, on one side through a porch, and on the other beneath the tower, the pewing running right and left on passing to the eastern end, and returned into the transepts with doors at each end of same. The nave is separated from the aisles by light cast-iron columns, with ornamental caps, formed to take each of the roof principals. The nave is divided by these columns into four bay?, the western end being filled by a light and open gallery, carried by ornamental iron brackets on carved corbels. The chancel is semi-octagon on plan, divided from the body of the church by coupled stone columns, caressing a deeply moulded-arch, the capitals and corbels being delicately and effectively carved. The pulpit, standing on the right hand of the communion recess, is of Bath stone throughout, the pillar and upper parts of same having colours inlaid, partly in marble and alabaster, the panels on pulpit sides having subjects carved in bold relief, representing the ‘ Sermon on the Mount,’ and ‘ John Preaching in the Wilderness.’ The chancel is raised by t wo stops from the body of the church, with an ornamental rail and standards, to separate the same from the church, the paving being of rich and deep colours, manufactured by Messrs. Maw & Co. The walls of chancel are lined with Maw’s tiling and slabs of stone handsomely illuminated with the Lord’s prayer and appropriate texts, the whole being surmounted by a stone capping, having an illuminated text in the frieze. The organ forms a bold feature at this end of the church, being, by the advice of Mr. Jones, the maker, projected somewhat into the church. It is canopied in harmony with the style of the building. There are five large stained glass windows, and several smaller ones, which arc contributed by various members of the church “” one representing the charge of Christ, to ‘ go and teach all nations,’ and also the disciples ‘ leaving all to follow Him,’ which have been

g’accd there in commemoration of the ejected clergy of 1662. Messrs. eaton, Butler, & Bayere were the makers of these windows. The exterior of the church has its principal elevation to the Upper Street, the outline being broken and varied, on the one side a tower and spire rising to a height of nearly one hundred and twenty feet in the centre, the western gable, with its large four-light window, filled with tracery on each side, being

flanked with canopied and delicately carved two-light windows, the other side having the entrance porch and staircase turret to enter the gallery. The materials used in the exterior are wholly Kentish rag facings, with Bath stone dressings, the entrances having granite polished shafts, deeply recessed. The church will accommodate 600 persons, and bears throughout the marks of an Italian treatment of the Qothic style. The minor details of tha lighting and heating have not been unattended to, the former being by coronals of light, suspended from the hammerbcams of the roof in the nave, and by larger chandeliers in the transepts; the heating being by hot water, laid in the aisles under open and perforated gratings. Messrs. Peard & Jackson, and Messrs. D. & E. Bailey, were the respective contractors for this portion of the work.