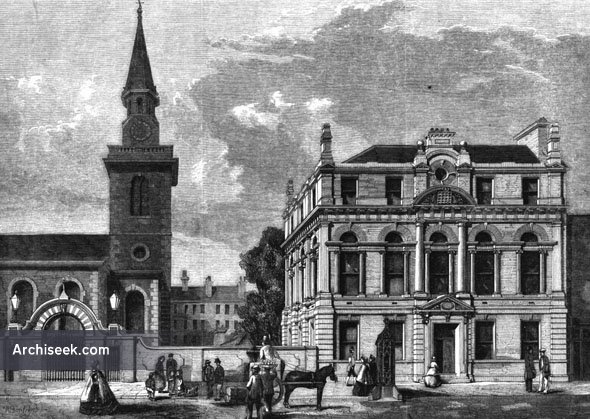 From The Building News, May 16, 1862: A building, now approaching completion, and of which we give a JL view on another page, has been erected by the Vestry of St. James’s, Westminster, for the purpose of providing a more suitable and convenient place than they have hitherto possessed in which to hold their public meetings; but chiefly for the concentration and more economical performance of that portion of the parish business which comes immediately under their control, and which, at much inconvenience and expense, has been hitherto conducted in several offices.

The committee under whose superintendence the building has been erected, having obtained designs, instructed their surveyor to prepare plans, and accepted the tender of Messrs. Mansfield. The work was commenced in the early part of the summer of 1861, by the removal of an existing building, one of the best structures, both as to materials and workmanship, that it has been the architect’s good fortune to see.

The difficulties that arose in the arrangement of the building consisted mainly in the confined space that was available for the purpose; the architect having strict instructions to encroach as little as possible upon the churchyard, and that any encroachment really necessary should be on the yroviid-floor only, leaving the soil below as far as practicable intact. To accomplish this, there has been no excavation under the rear rooms, the external wall towards the Churchyard being carried on wrought-iron girders, with a massive relieving arch over them, finished with tile arches in cement on smaller girders below.

The style adopted for the elevation is Italian, to correspond with, though not to imitate, the exterior of the church, the architect having attempted to produce something that should be simple, bold, and durable ; care being taken that the character of u public building should be definitely given.

The materials adopted are red bricks and Portland stone. Instead of the bricks showing the arrises round the reveals of the windows, n molding has been substituted. It may bo mentioned that the architect’s original proposition was to execute the whole nearly as at present in red bricks, including moldings and enrichments.

The extremely confined space, and there being very little available basement, required a great deal of study to provide in the plans all that was necessary, and at the same time to avoid the appearance of being cramped, always fatal to architectural effect. This has perhaps, on the whole, been satisfactorily accomplished, though it has involved an amount of work in the plans and sections not usually given in so small a structure, and which would hardly have been attempted by many.

Entering at the principal doorway in Piccadilly, in which some originality of detail has been attempted, a lobby with spring doors is provided, paved with plain tiles arranged in patterns, and divided into four bays by plain pilasters; it has a semicircular ceiling and Welsh groins over the openings, two of these arches give access to the staircase, and columns are substituted for the pilasters. These columns have rouge royal marble

shafts in one piece, with Ionic caps and bases, executed in statuary marble, the cost of this being found not greatly to exceed that of scagliola, with cast-iron cores.

On the right is a room appropriated as a Savings Bank, and on the left the office for conducting the business of the Vestry, with the Vestry Clerk’s private office leading from it. Opposite the principal entrance is the Rate Collector’s Office. The hall and staircase has a second entrance from the churchyard. Underneath the landings and staircase, space for the necessary adjuncts is contrived by means of some descending steps.

Descending into the basement, formed of two long barrel vaults, previously existing and disturbed as little as possible, one only of which was available, we enter the Muniment Room, about 18 ft. x 11 ft, having one of Chubb s fire proof doors, and a gate within, to allow of the door being opened to admit air; to check damp and provide ventilation, an air chamber is formed all round with air bricks; there is also an air flue provided in the crown of the arch forming the ceiling; the fittings of this room consist of slate shelves pn half brick piers, the floor is paved with plain square tiles set diagonally.

A large coal-cellar occupies another portion of the basement; and the space under the staircase is available for a variety of purposes, such as gas experiments. A sink and water supply is also provided. The basement generally was constructed in the early part of the present century, and has been left as nearly intact as circumstances would permit. The first floor contains the vestry hall and a committee-room, the vestry hall being alxjut 38 ft. x 28 ft, and 18 ft, high, with a small gallery over the entrance from the staircase. The fireplaces are to be contrived under the centre window at each end, an arrangement that is in many ways satisfactory. This room and the committee-room have double sashes to all the windows, the inner ones being of wainscot, the doors and other woodwork in these rooms, together with the whole of the fittings, being of the same material. The committee-room communicates with the vestry hall and landing; it will also serve for a waiting-room for deputations, &c. Leading from the landing and vestry hall is a small retiring-room. This room has been obtained by throwing a wrought-iron girder across an angle and building on it. It contains a water-closet, urinal, and lavatory, and is finished below by small tile arches between iron girders, and above with a flat. Ascending the stairs, we reach the ” Ratepayers’ Gallery,” a small gallery for the parishioners. On a level with this is a small room obtained by keeping the floor of the committee-room and staircase landing a foot below the vestry hall, which, giving 19 ft. clear, allows a committee-room 10 ft. 6 in. high, and an intermediate-room 7 ft. 6 in. high. This room is especially useful, as it is available from the first or second floor, and may be used with either. The windows of the vestry hall have plain architraves raised upon a dado, all in Keen’s cement The ceiling is to a certain extent ” trabeated,” following the constructional arrangement with a deep cove and small groins formrd round the semicircular windsws. The enrichments in the railing are mostly perforated, and are connected with ventilating flues. A supply of fresh air is to be obtained by opening a number of valves. The committee-room is provided with corresponding arrangements. The fireplaces in these rooms are of marble, inlaid with Minton’s tiles, in panels of a severe pattern. The ceiling of the vestry hall, forming the floor of the rooms above, is carried principally by two stout queen post trusses, with wrought-iron tie-rods, preferable, in the opinion of the architect, to iron girders. All the piers between the windows are carried up in Portland cement, more for the purpose of guarding against unequal settlements than for any additional strength supposed to be acquired thereby. A double or “Victoria” flooring has been adopted in the vestry hall.

The second floor provides accommodation for an office-keeper, consisting of a_sitting-room, fitted with range, sink, &c. &c.; two bed-rooms, watercloset, and closet for coals, Sec., all entered from one door, and disconnected from the rest of the rooms on this floor, which comprise one large and three smaller rooms, available for any purpose that may be required.

The staircase has Portland stone spandril steps, and 6-in.Portland landings. Both the landings and steps are carried at the ends on wrought-iron girders, bracketed and plastered, with ornamental trusses or corbels against the walls. The windows will be glazed with coloured and ornamental glass. An enriched iron handrail, and mahogany capping, is continned as far as the Ratepayers’ Gallery.

The main cistern is in the roof, supplying smaller ones near where they are required, the latter being also provided with independent services. The various water-closets, urinals, and lavatories are by Mr. Jennings, as are also the drain-pipes, and include his later improvements. The whole of the works have been most satisfactorily executed by Messrs. Mansfield, the amount of their contract being in round numbers £6,000.

The portion of the boundary wall to the churchyard, seen in the engraving, is part of an extensive series of works carried out under the superintendence of the rector and churchwardens, consisting of the boundary wall and gateway, an alms-house for distribution of alms daily, also various necessary adjuncts to the church, as coal, coke, and dust sheds, waterclosets, &c. In addition to these new works, the parish engine-house has been rendered more available for its purpose, the various walls pointed and repaired, the railings repaired and painted, and the “Green Churchyard,” towards Jermyn Street is proposed to be completely renovated and rendered! an ornament to the parish, instead of being a mere depository for rubbish as heretofore,

Mr. A.P. Howell, Surveyor to the Vestry, has designed and executed the building, ably and honestly seconded by Mr. George Ellverly as Clerk of the Works.