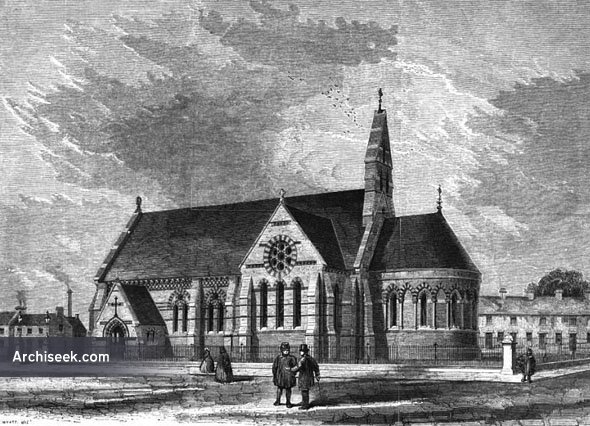 From The Building News, May 23, 1862: February 28th last, we gave a description of this church, which we illustrate on the opposite page this week. The following are the principal facts contained in our description in the number referred to:””This church was erected from designs by Mr. G. G. Scott, and has been built by Messrs. Osborn Brothers, of Leicester. The ground plan of the building is cruciform, and consists of nave, transepts, and chancel with semicircular apse. It is built in the Early English style, almost entirely of brick, slightly relieved with Bath stone, which is introduced in the arches, the window sills, the weatherings of buttresses, the arcade round the exterior of the apse, and in various other parts of the building. The exterior is principally of red brick, ornamented with blue. The gables are coped with brick, with stone springers. The roofs are covered with Swithland slates, in diminishing courses. The two principal entrances are through a door at the west end and a porch on the south side; and there is also an entrance for children in the north transept. The view presented on entering the church at the west door is good, the rich soft colour of the bricks with which the walls are faced, and the lofty arches which divide the nave from1 the chancel and transepts, together with the complicated timbers of the roof, adding much to the general effect. Owing to the absence of pillars, the altar and pulpit can be seen from every part of the building. The nave is covered with an open-timbered roof of one span, the ridge of which is about 60 feet above the level of the floor. The principals, which are seven in number, form double arches across the nave, each arch with two parallel circular braces bolted together, the spaces being filled in with light cross braces to form a diamond pattern. These principals spring from shafft at the height of about 12 feet from the floor line. The roofs over the transepts are cross-braced. Wrought boarding covers the whole, and thetimbers throughout have been stained and varnished. The nave is seated with open stalls of stained and varnished deal. The transepts are seated with movable benches. The stalls in the chancel are of more elaborate design. The church affords accommodation for about 960 persons. Provision is made for an organ in a chamber over the vestry. The pulpit, on the north side of the chancel arch, has a stone base, formed of a cluster of small octagonal shafts, encircling the centre pillar. The upper part is of deal, carved with a simple ornament. The font is plain, and harmonises with the general character of the church. The floor is laid with red and black Staffordshire tiles, in various patterns. The windows are glazed with cathedral glass, the circles in the upper portion of the nave windows being filled with ornamental designs. The chancel is lighted by a corona, by Skidmore, of Coventry, who has also supplied the standards in the nave, and the small corona which lights each transept. The entire cost of the building is, we believe, about £5,000.