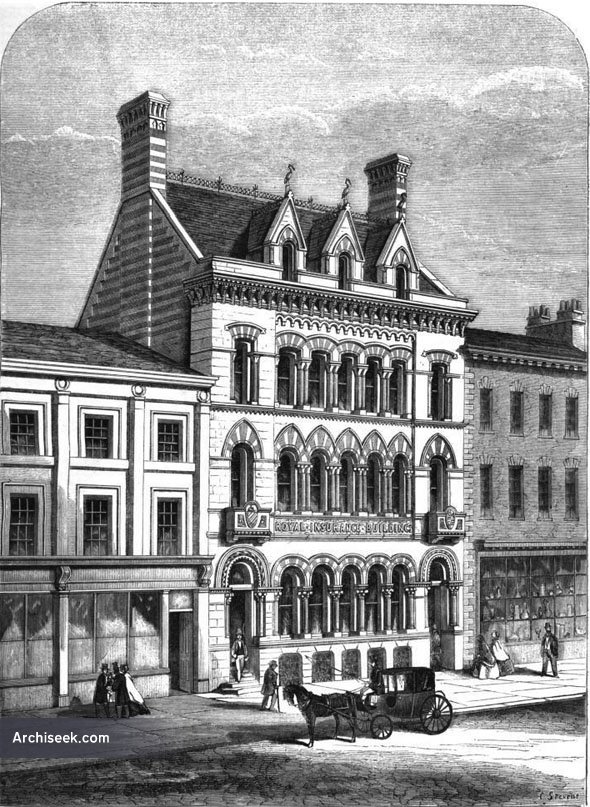 From The Building News, August 8, 1862: This building, which has been erected by the Royal Insurance Company, for the accommodation of their rapidly increasing business in Manchester, was described somewhat at length in our issue of the 6th June, in an article on ‘ Manchester Insurance Offices.1 It is, therefore, only necessary in the present article to call attention to some few points in its construction, which were then not sufficiently advanced to be noticed.

The open area for light in the centre of the building is not large, as the site is too narrow to admit of its being so; but by keeping down the caves of the inner roofs, avoiding cornices and other projections, and by the use of whit* glazed tiles, with narrow encaustic borders on the wall surfaces, the rooms looking into tho area, even on the ground floor, are well lighted. The bottom of the area is formed by the glass roof over the centre of the basement. The staircase’ is carried up in one corner of the area, and opens into it through arches divided by castiron columns.

The general office of the Company is in front of the building on the ground floor, and is entered from the street by a small vestibule fitted up in oak inlaid with ebony. The part of the office devoted to the public is divided from the other portions of the building by an arcade of Caen stone, supported on shafts of vertdemer marble. The ceiling is deeply paneled, the walls wainscoted in oak, the chimney-pieces of vertdemer and black marbles.