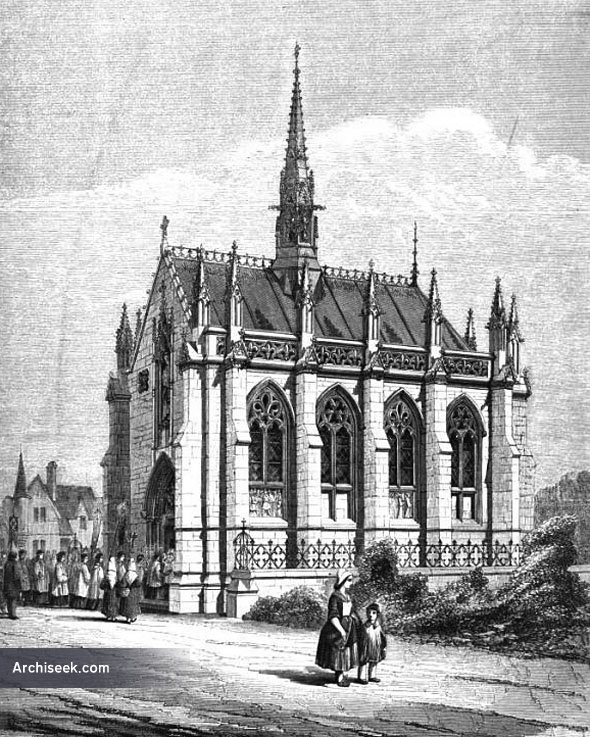 From The Building News, February 28, 1862: This chapel, of which we give a view in our present number, has recently I been erected on the outskirts of Boulogne, on the Paris road. It is intended to be similar in design to a chapel erected in the thirteenth century, which had become famous, not only throughout France, but also throughout Christendom, as a place of pilgrimage.

The last remnant of the original structure was swept away during the Revolution, and a mean, unsightly building was erected soon after, in the worst possible taste ; this has now been entirely demolished, and the present building erected on the original foundations. The new building, has been designed by an English architect (Charles F. Hansom, of Clifton), and, together with two other churches in the same town, has been executed under his superintendence.

The Chapel of Notre Dame is executed entirely in the beautiful white atone from St. Leu. It is very small, being only 27 feet long by 15 feet wide internally. Each bay is marked by a projecting wall shaft, with carved capitals, from which springs a groined roof of stone, enriched with moulded ribs and sculptured bosses. The altar and rercdos are executed in Caen stone, and occupy the centre and two side bays of the apse. The floor is laid with Minton’s encaustic tiles, of rich patterns, and all the windows are filled with stained glass.

Externally, the history of the original chapel is pourtrayed in a series of sculptured panels in the lower compartments of the window, and in the tympanum of the entrance doorway.

The carvings and sculptured decorations have been executed by Mr. W. Farmer, of London.