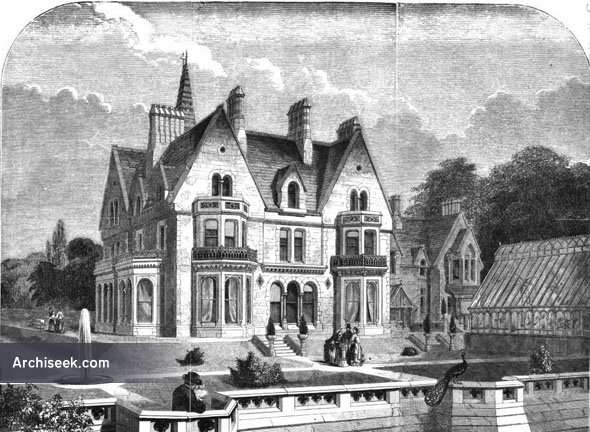 From The Building News, June 20, 1862: This house, of which we give an engraving on the opposite page, is situated at Weetwood, a few miles from Leeds, and is built on the brow of a thickly-wooded bank, shelving rapidly down to a small streamlet, the Adel Beck (beck being the Yorkshire name for a rivulet). It is built of sandstone, partly quarried on the site and partly obtained from the Weetwood quarry, which is close at hand. From the flat roof of the tower, over the entrance, very extensive views can be obtained on all sides, as there is very little, if any, higher ground for many miles round. The view shows the south-west and south-east fronts. The library window and large bow of drawingroom are to the south-west; the smaller bow of the drawing-room, that of the dining-room, and the window of the morning-room between them, are to the south-east. The receding wing contains nursery accommodation on the first floor; kitchens, larders, &e. (north-west); and butler’s pantry, servants’ hall, &c. (to south-east), on ground floor; and wash-house, laundry, wine cellars, &c., on basement story, which is entirely above ground on south-east side.

The house is entered by an open porch in the tower, hall, with cloakroom and saloon, from which the four principal rooms are entered, and from which the principal staircase ascends. The servants’ rooms are on the-top story of the main building.

The glass porch, seen to the right of the dining-room window, is to the garden entrance; and the conservatory stands immediately in front, at the end of the terrace flower garden.