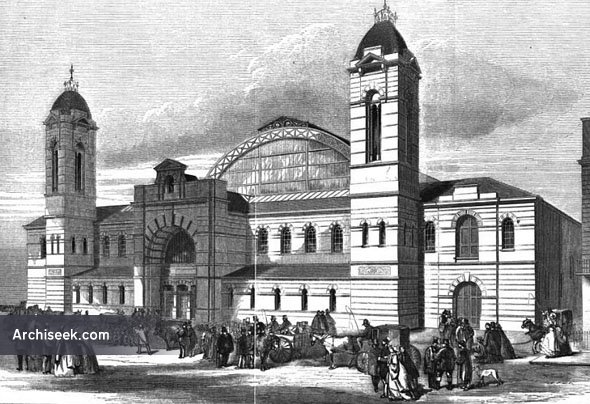 From The Building News, December 5, 1862: This building is now completed, and will be opened on Monday next by the Smithfield Club. It has been erected by a company (limited), and leased for the use of the Smithfield Club, for the purpose of holding their December meeting and cattle show; at other periods the company intend to let the building for public uses.

In order to secure a suitable design for their building, the directors invited architects of established reputation to a competition. They limited the cost of the building to £25,000. From the designs sent in, the directors selected one by Frederick Peck, Esq., of Maidstone, which appeared in every respect admirably adapted for the purposes of the company. Six eminent contractors were invited to send in tenders for the execution of Mr. Peck’s designs. The directors selected the lowest tender, that of Messrs. Hill, Keddel and Co., of Whitechapel, who agreed to execute the work for £24,980; the highest was £26,600. The great hall or Cattle Show is 384 ft. long and 217 ft. wide, and the whole area is covered with a central segmental roof of 145 ft. span, and two other side roofs of 36 ft. span; under the latter roofs, which are re-turned at the ends, are placed the galleries for the display of implements and light machinery. The inner hall adjoins the Cattle Show, and in arranged for the show of pigs, measuring 100 ft. by 100 ft.; it is covered with roofing similar to that over the side galleries. The offices of the company, and the Smithfield Club, together with a residence, form a block of buildings near Burford-street, near which block refreshment rooms, lavatories, ladies’-rooms, and other conveniences, are placed. The front, next Liverpool road, presents two features, in the shape of turrets, used for the purpose of ventilation, and a central entrance, near which are offices and rooms for the use of salesmen, police, telegraph, post-office, 4c. The front, next Upper-street, is formed with a central archway, and a shop on each side; it is intended to continue the shops up to the great Hall, and cover over the avenue with a light iron and glass roof.

The whole of the fittings for the use of the Cattle Show can be easily removed, the ports being secured into iron sockets, let into the asphalte flooring. The building has given general satisfaction, and it is confidently expected that the scheme will realize the expectations of the shareholders. It is stated, by competent judges, that the building is admirably adapted for concerts, Ac., the proportions being conducive to the transmission of sound.