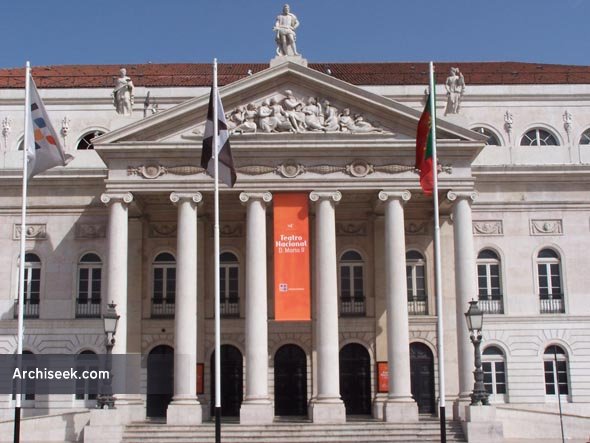 The theatre was built on the site of the old Estaus Palace, built around 1450 as a lodging for foreign dignitaries and noblemen visiting Lisbon. In the 16th century, when the Inquisition was installed in Portugal, the Estaus Palace became the seat of the Inquisition. The palace survived the 1755 Lisbon Earthquake, but was destroyed by fire in 1836. The building was constructed between 1842 and 1846 to a Neoclassical design by Italian architect Fortunato Lodi.

The tympanum of the pediment is decorated with a sculpted relief showing Apollo and the Muses. The pediment is topped by a statue of Renaissance playwriter Gil Vicente (c. 1464-1536), considered the founder of Portuguese theatre. The interior of the theatre was decorated by many important 19th-century Portuguese artists, but much of this decoration was lost in a fire in 1964.