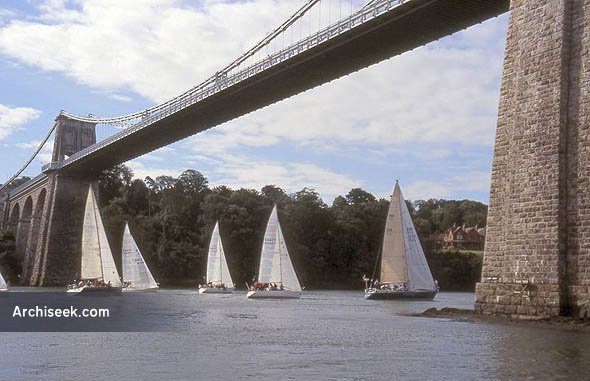 Prior to the bridge’s completion in 1826 the island had no connection to the mainland and all movement to and from Anglesey was by ferry. However, the Act of Union 1800 increased the need for transport to Ireland, and with Holyhead as one of the principal terminals to Dublin it was decided that a bridge was needed.

Thomas Telford was assigned the task of improving the route from London to Holyhead, and one of the key improvements was his design of the suspension bridge over the Menai Strait between a point near Bangor on the mainland and what was then the village of Porthaethwy which is now also known as Menai Bridge on Anglesey. The design of the bridge had to allow sailing ships 100 ft tall to pass under the deck at high tide.

Construction of the bridge began in 1819 with the towers on either side of the strait. The bridge was opened to much fanfare on January 30, 1826, and succeeded in reducing the 36 hour journey time from London to Holyhead by 9 hours. On February 28, 2005 the bridge was promoted to UNESCO as a candidate World Heritage Site.