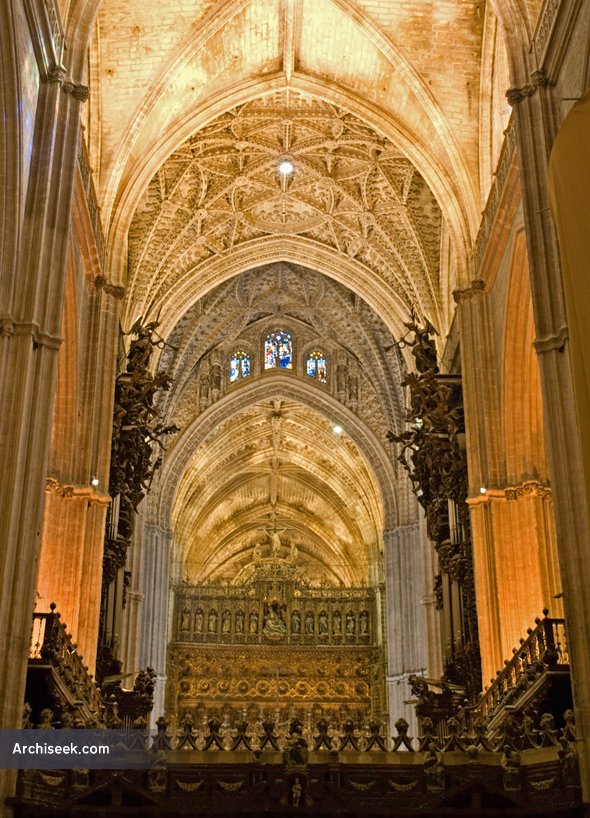 The Cathedral of Seville is one of the largest cathedrals in the world and contains the burial site of Christopher Columbus. The cathedral was built to demonstrate Seville’s wealth, as it had become a major trading center in the years after the Reconquista. According to the oral tradition of Seville, “Let a church so beautiful and so great that those who see it built will think we were mad”. According to the minutes of that day, the new church should be: “a work such as good, which like no other.”

Construction began in 1402 on the site of a former mosque, following the capture of Seville from the Moors; it continued until 1506. Five years after construction ended, in 1511, the dome collapsed and work on the cathedral re-commenced. The dome again collapsed in 1888, and work was still being performed on the dome until at least 1903. The 1888 collapse occurred due to an earthquake and resulted in the destruction of “every precious object below” the dome at that time.

The interior has the longest nave in Spain. Its central nave rises to a height of 42 metres and is lavishly decorated, with a large quantity of gold evident. In the main body of the cathedral, only the great boxlike structure of the choir stands out, filling the central portion of the nave. It is also dominated by a vast Gothic retablo of carved scenes from the life of Christ. The altarpiece was the lifetime work of a single craftsman, Pierre Dancart.

The builders used some columns and elements from the mosque, and most famously the Giralda, a minaret converted into a bell tower. The Giralda is the city’s most famous symbol. Its square base is 13.61 meters and a height of 105 meters. It was built as a minaret of the old mosque, although the bell tower and spire top, is Renaissance.

The Giralda has several sister towers. The same architect, Jabir, who built the Giralda also built similar towers in what is now Morocco. The tower of the Koutoubia Mosque in Marrakesh served as a model for the Giralda and its sister, the Hassan Tower in Rabat. Several church towers in the province of Seville also bear a resemblance to the tower, and may have been inspired by the Giralda. These towers, most notably those in Lebrija and Carmona, are popularly known as Giraldillas.