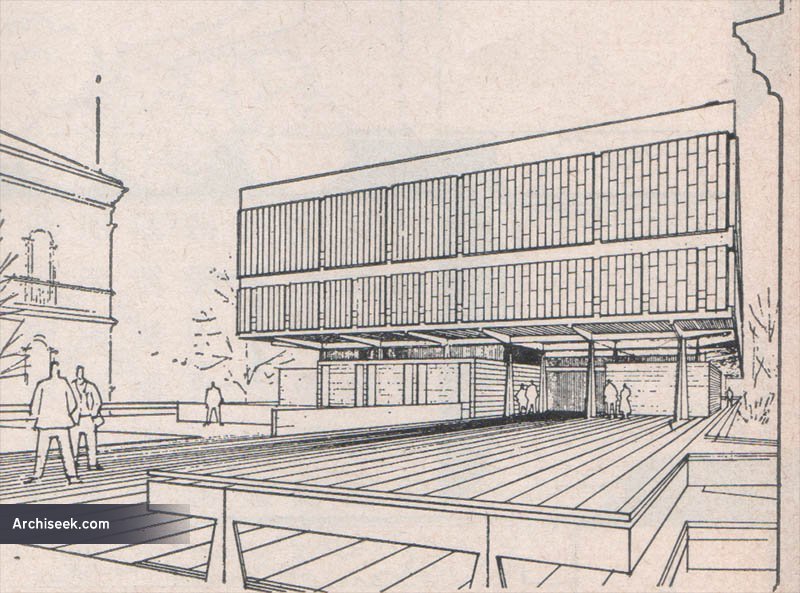 The winning design, No.123, in the architectural competition to design a new library for Trinity College Dublin. The jury report stated “The design is consciously modern in style and construction, and the author shows enough good taste and judgement to encourage confidence that, when built, the new library will be a notable addition to the architecture of the college.” The finished building, known as the Berkeley Library is one of the finest modern buildings in Ireland.

“A happy feature shared with other successful designs is the entrance courtyard formed by the new and existing buildings, a feature which in this case is extended as a podium for the main building. The jury questions the wisdom of introducing a pool into this court especially in view of the book storage below.”

In this original design, the raised podium was to be finished in black slate to contrast with the granite facing of the exterior walls, and a dark grey limestone on the ground floor walls. Internally the service and circulation core was to be faced in a dark green marble.

Paul Koralek, who was only a young architect starting out at the time of the competition, wrote in his design submission that: “the layout of Trinity College is in the finest tradition of university architecture. The individual buildings, basically simple rectangular blocks, are so related as to create a whole system of quadrangles and outdoor spaces. It is a pattern which can naturally grow and develop and one that must be respected by any new building.

The existing library has a classical simplicity of form to which it would be impossible to add without detracting from the quality of the building. The problem in building an extension to the Library is therefore to provide the necessary functional connections with the old building without joining the buildings in a manner that would necessarily compromise the design of both.

The siting and basic organisation of the projected new library building is a result of these considerations.It is placed in relation to the old Library and the Museum Building so that it naturally forms a courtyard between them which opens onto New Square and serves as an entrance court for the both the old and new libraries. It also makes possible the development of a future quadrangle either on the Fellows’ Garden or the western end of College Park.” In this way Koralek paved the way for the future Arts Building, designed by his practice Ahrends Burton and Koralek, at the Nassau Street edge of the site creating this new square.

The decision of the jury was not unanimous however, Professor Albini of the Instituto Universitario di Architettura, Venice, abstained from voting in favour of it being awarded the first prize. He issued a personal statement which included, Despite the qualities to be found in favour of No. 123, the most important reservation that I feel is my duty to make concerns the architecture which, though of a high standard, does not seem to me to harmonize with the surroundings in which the new building is to be situated. This reservation applies, not only to No.123, but in general to almost all the the designs examined. the present surroundings are determined principally by the architecture of the old library, which is the more authentic work of art of he two adjacent buildings, being notable for the regular rhythm of its windows, the uniformity of its materials, and the firmness of its stone construction.”

Albini doesn’t seem to have been a fan of Deane & Woodward’s Museum Building, but he goes on to say: “Without going into details, No.123 and for that matter many of the others, does not appear to give any indication that the problem of inserting the new architecture within the present surroundings has been faced up to, or that the restraints and stimuli that would result from this insertion have been assessed, so as to reach an architectural solution. This solution could have been unreservedly contemporary whilst at the same time, without making concessions to a ‘period; taste, it could have attempted that dovetailing with tradition which present-day architectural thought regards as one of its most immediate problems.

For the above reasons I cannot honestly advise the adoption of design No.123, simply as it stands. I feel confident, however, that its author can revise it, bearing this problem in mind, For he has shown a keen awareness of the many other arduous problems which he has encountered and solved, brilliantly, in his design.”