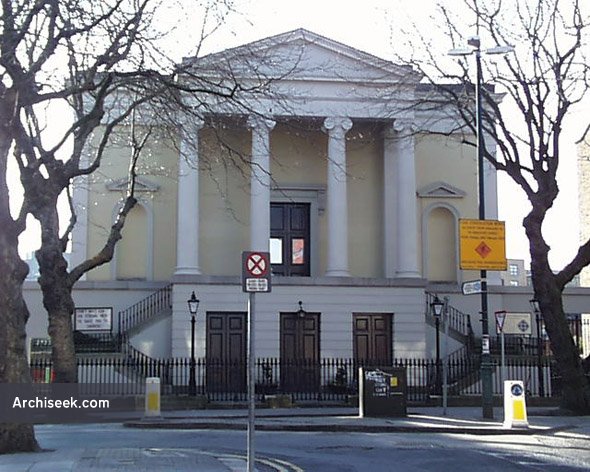 Originally designed by Isaac Farrell, the interior had a galleried interior for a congregation of 800. The dors in the plinth led to the body of the church while those in the portico led to the gallery. Unfortunately all that remains is the imposing facade, as the interior was gutted in 1999 and the building redeveloped to reflect the church’s changing role in the community. The Ionic portico is inspired by the Villa Malcontenta.

In 1884, The Irish Builder reported that: “IN connection with the Presbyterian Church, Adelaide-road, additional premises have just been completed. These consist of a lecture hall 58 ft. by 22 ft., which can be further enlarged by the addition of another room separated by sliding doors 14 ft. by 22 ft. It will accommodate over 300 persons. The height to the wall-plate is 12 ft., and the roof is finished open to the ridge, affording an average height of 15 ft., and good pro vision for ventilation. There are entrances at the rere, where the stairs conduct to a new committee-room, and to the original library, with which it communicates by a large doorway, which is panelled with cathedral glass. Into the library roof there has been inserted a lantern light, which distributes the light equably through the room. When the folding doors are open, a convenient room is provided, 52 ft. by 22 ft. for minor meetings, committees, and such like. An ante-room is fitted up for cooking purposes, and the upper rooms are fitted up with fire-places, and the lower ones with hot water pipes.”