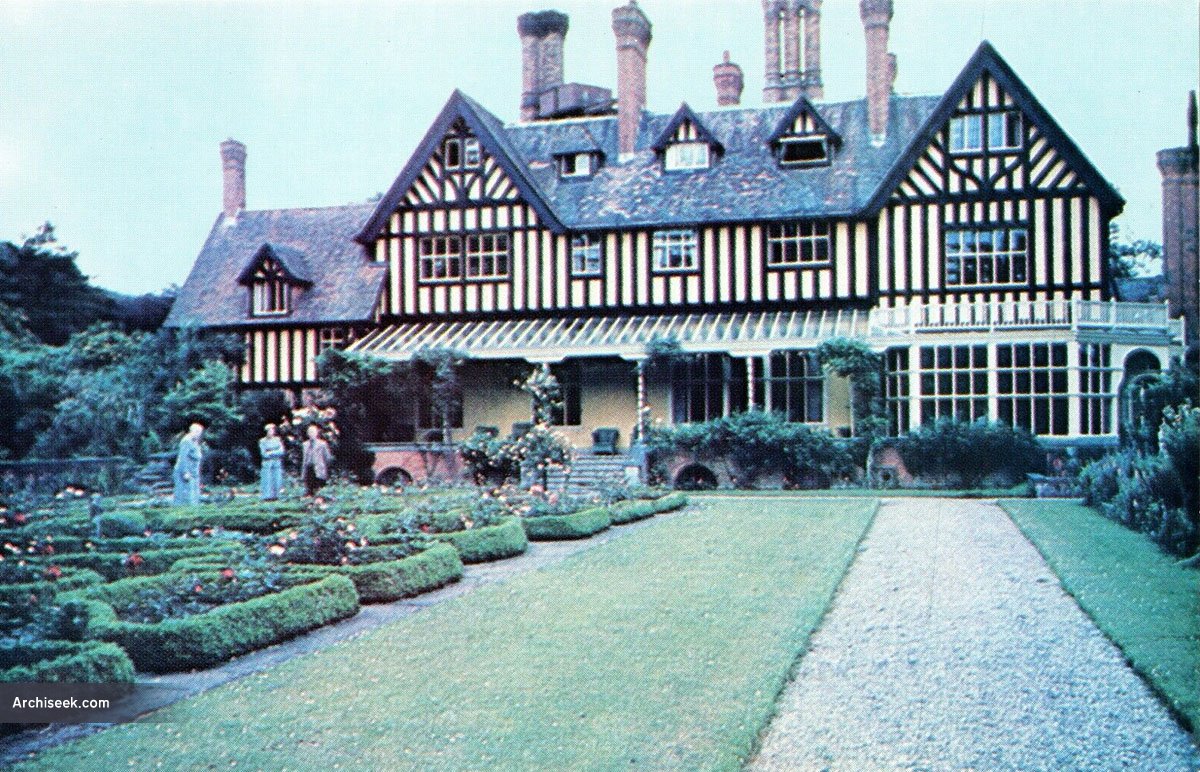 Constructed by the Herdman family, who constructed the model village and mills of Sion. Now sadly in very poor repair and must be considered at risk of loss. Published in The Irish Builder, 4 December 1884. “Sion House, the residence of ET Herdman, Esq., JP, which, for some time past, has been undergoing extensive alterations, is now completed, and as the building and grounds are singularly picturesque and pleasing, a short description (says the Londonderry Sentinel) of what is unquestionably one of the most unique and remarkable examples of domestic architecture in the North of Ireland, will be read with interest. The approach to the grounds is on the main road from Strabane to Baronscourt, about three miles from the latter place, and is entered through a delightfully quaint Old English gate-house of striking originality, containing a porter’s residence and covered porch carried over the roadway.

Winding down the graceful sweep of the avenue, through the wooded grounds which appear to have been laid out with considerable judgment many years ago, we catch a glimpse of the house, reflected in the artificial ponds formed in the ravine that is crossed by a two-arch stone bridge of quite medieval character.

As we approach the house, the general grouping of the house is most pleasing, and the full effect of the rich colouring of the red tiled roof is now apparent, diversified with quick pitched gables, quaint dormers, the beautifully moulded red brick chimneys, the sky-line being covered by the Tyrone mountains and the village church in the distance. The style of the building is late Tudor of the half-timber character, which, though it has been described as showing a singular and absurd heterogeneousness in detail, yet gives wonderful picturesqueness in general effect. The principal entrance is on the north side, through a verandah, supported on open carved brackets, in which is placed an old oak settle, elaborately carved and interlaced with natural foliage in bas-relief. On entering through an enclosed porch we are ushered into a spacious panelled hall, with its quaint old-fashioned staircase, open fireplace, and wood chimneypiece, with over-mantel extending to the height of the panelling. The screens enclosing the entrance porch, as also that from the garden entrance to the south-east side, are filled in with lead lights, glazed with painted glass, and emblazoned with national and industrial emblems, monograms and coats of arms.

The billiard-room, which is in a semi-detached position, and entered from the east side of the hall, is very characteristic of the style of the building, having the principal roof-timbers exposed, and forming the pitched ceiling into richly-moulded panels. The walls are wainscoted to a height of 5 ft in richly-moulded and panelled work.

The fireplace is open, and lined with artistic glazed earthenware tiles of a deep green colour and waved surface, giving a pleasing variety of shadow, and is deeply recessed under a quaint panelled many-centered arch, freely treated, forming a most cosy chimney corner with luxurious settles on each side. On a raised hearth, laid with terra-metallic tiles in a most intricate pattern, are some of the finest examples of wrought-iron dogs we have ever seen. There is also in this chimney-nook a charming little window, placed so as to afford a view of the pleasure grounds. The reception rooms are on the south side. On entering the spacious drawing-room we notice particularly the panelled architectural across the further end, which forms a frame to the beautiful mullioned bay window, enriched with patterned lead glazing.

From the recess of the bay a side doorway leads to a slightly elevated verandah, enclosed with balustrade, extending the full length of the south façade, and leading to the beautiful conservatory on the south side, with a short flight of steps giving access to the tennis lawns. The dining-room is enclosed off this verandah by a handsome mullioned screen, having folding doors and patterned lead glazing similar to the drawing-room bay. The walls of this room are panelled and moulded in English figured oak, enriched with carvings, the arrangement of the buffet being an especial feature, as it forms part of the room in a coved recess and designed with the panelling. The fireplace is open and lined with tiles, in two colours, of the same description as in the billiard-room, with chimneypiece and over-mantel of carved oak, having bevelled mirrors, and arms carved in the most artistic manner in the centre panel. The mullioned screen masked by a gracefully-carved arch, made in oak, and capped (as is also the panelling over the buffet and mantel) with a moulded cornice, supported with artistically carved brackets and richly dentilled bed-mouldings. Here and in drawing-room the ceilings are of elaborate workmanship, enriched in fibrous plaster, with moulded ribs in strong relief, and massive cornices, with chastely enriched members. The floor, like those of the principal rooms and halls, is laid in solid oak parquetry.

The library and morning-room are situated on the north side. These rooms are complete in arrangement for comfort, most of the required furniture and fittings being constructed with the building and in perfect character. The culinary departments are situated on the west side, on the same level with the principal rooms. They are of the most perfect and convenient description, containing every modern appliance for suitable working.

Here also the evidence of artistic design is to be observed, more especially on a wrought-iron hood, constructed over the range for the purpose of carrying off the odour from the cooking, to flues provided for that purpose. The hood is a very intricate piece of wrought-iron work, which, we learn, was manufactured at the engineering works of the Messrs Herdman & County. The upper floors contain sixteen spacious bed-rooms with dressing-rooms. Several of the bedrooms are obtained by the judicious pitching up the main roof, and obtaining light through the quaintly-shaped dormers, which form so marked a feature on the roof-line. There is a spacious basement extending under the entire area of the building, which contains the usual offices, and in which are placed two of Pitt’s patent apparatus, now so favourably known for warming and ventilating, by which warmed fresh air is conveyed to the various apartments and corridors. One of the great features of the exterior elevations are the balconies, of which there are several, whence views of the varied scenery and charming surroundings can be obtained. There is also easy access to the leads of the roof, from which more extended views of the beautiful and romantic valleys of the Foyle and Mourne, together with the picturesquely grouped plantations of the Baronscourt demesne, and the far-famed mountains of Barnesmore, Betsy Bell, and Mary Gray, can be seen in the distance. From this point a magnificent bird’s-eye view can be obtained of the village of Sion and of the palatial buildings which form the flax-spinning mills and offices of the Messrs Herdman & Co., which we are pleased to observe are so rapidly extending their lines and improving under the enlightened policy of the spirited owners. The gardens and grounds are laid out in terraces, with low red brick walls, in character with the house, which give great effect when viewed from the several levels. It is noticeable throughout the perfectness and richness of all the detail, which has been carried out with great care, from special designs. The architect has succeeded in giving an individuality and picturesqueness of outline, due proportion of its parts and beauty of the whole, to the buildings and grounds, which have not been heretofore obtained in this part of the country. The execution of the work throughout was entrusted (without competition) to Mr J. Ballantine, builder, of this city, who has carried it out in a style of workmanship maintaining his high reputation as a builder, and reflecting credit on the skilled tradesmen associated with him in the work. The entire building, gate entrance, bridge, grounds, fittings, and principal furniture have been carried out according to the designs, and under the superintendence of Mr WF Unsworth, FRIBA.’