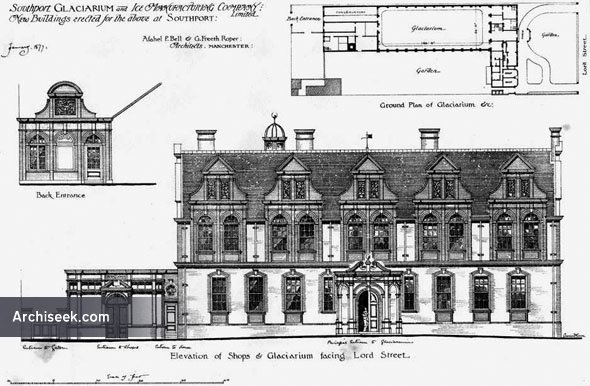 One of the earliest artificial skating rinks in the world was constructed at Southport. The foundation stone was laid by Lord Clarence Paget on April 5th, 1877, it cost £30,000, was 164 by 64 feet and was opened on January 10th, 1879, thus coinciding with the foundation of the National Skating Association. This rink, “The Southport Glaciarium”, was advertised as: The Only Real Ice Skating Hall in the World! The Figure Skaters’ Paradise! Open in all Seasons! Spring, Summer, Autumn and Winter! Admission 6d. In 1889 after ten years of struggle and eventual financial loss, it closed down.

“This glaciarium has been erected to provide for the rapidly-growing^ town of Southport a cold store for the preservation of meat, also a manufactory for pare ice, and the largest sheet of ice for skating that has ever b«>en produced by artificial means, which will add much to the attractions of this favourite seaside resort. “