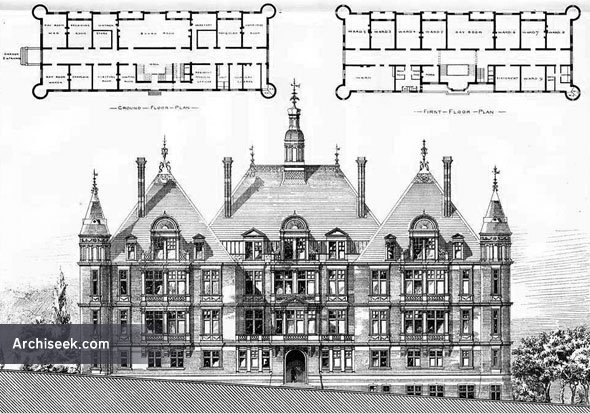 The North London (later Mount Vernon) Hospital for Consumption and Diseases of the Chest was founded in 1860 in Fitzroy Square (St. Pancras), but moved to an old house at Mount Vernon, Hampstead, in 1864, keeping an out-patients’ clinic at no. 41 Fitzroy Square. Apart from two private beds, the hospital took only patients who could not pay for treatment. From 1898 it received grants from the later King Edward’s Fund. In 1879, a building, designed by T. Roger Smith in 17th-century French Renaissance style, was built at Mount Vernon; the western block with 34 beds was started in 1880 and the central block was opened in 1893, making a total of 80 beds, but only 60 were in use in 1898 owing to lack of funds. A temporary extension was built in 1900 and the eastern block was completed in 1903, making a total of 140 beds. In 1904 a new Mount Vernon hospital was opened at Northwood, where by 1913 it was decided to concentrate its work. The Hampstead building was taken over in 1920 by the Medical Research Council.

“The design which we illustrate by giving the entrance-front, the garden-front, and two keyplans, was selected in open competition some time ago ; but the committee have only very recently felt justified in entering into a contract for the erection of a section (rather more than one-third) of the whole. The building is calculated for 100 patients, male and female. It will have three principal stories, in addition to an attic on the roof and a basement. The basement is appropriated to the out-patients’ department, and to stores, and for administrative purposes. On the ground-floor are placed the board- room, the rooms for medical and household offices, patients’ day-rooms, visiting-rooms, &c. The first-floor is appropriated to female patients, and the second floor to male patients. They are alike in their arrangements, and each contains a dining-room and a series of wards of moderate dimensions, calculated to receive from two to eight patients with aU the requisite conveniences. In the attic floors are placed the kitchens, &c., and the apartments of the domestic servants and attendants. A lift will give access to all the floors, in addition to which a spacious central staircase and a service staircase are provided. A special feature of the design consists in the arcaded balconies, of which there are eight on the south or sunny side of the building. In these, patients will be able to enjoy the fresh air and views and sunshine, without fatigue. The style, as the illustrations show, is Early French Renaissance. The materials being employed are red brick, with stone dressings and tiled roofs. The contractors for the portion now in hand are Messrs. Higgs and Hill, of Lambeth, and the architect is Mr. T. Roger Smith, F.R.I.B.A.” Published in The Building News, December 19 1879.