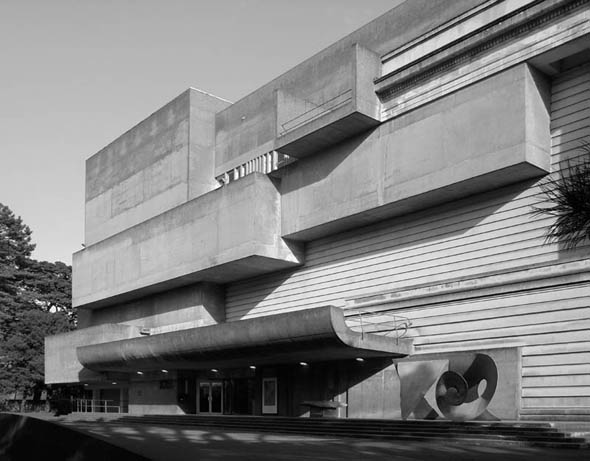 Text © Shane O’Toole. Photos © Mark Hackett. Fuller version of the piece first published in The Sunday Times, February 18, 2007, as “We must learn to love this culture bunker”

It’s Belfast’s Busaras, the building architects love and the locals love to hate. Perhaps it’s because the raw-boned Ulster Museum eschews the reassuring emotional associations of imperial grandeur attached to City Hall and the distant classicism of Stormont in favour of a more radical vision – one that turns its face blindly and unflinchingly towards the future. Or perhaps it’s because the museum arrived with the Troubles and is a reminder of them. Whatever the cause, the future of Northern Ireland’s greatest post-war building hangs in the balance.

The Ulster Museum is an institution in crisis. Before Christmas, the Public Accounts Committee at Westminster accused museum officials of “profound deficiencies in custodianship” because of failures “at a corporate level, to recognise the risk of damage or loss to the collection in their statements of internal control.” Yet within days the museum received £4.5m, its largest ever grant, from the Heritage Lottery Fund towards a controversial £12m project that would eviscerate one of Ireland’s few glories of mid-century modernism.

Francis Pym’s cubist sculptural tour de force, completed in 1971, is internationally renowned for its daring and prescient splicing together of old and new and for what the architectural historian David Evans calls the “almost barbaric power of its great cubic projections and cantilevers, brooding over the conifers of the Botanic Gardens like a mastodon.” Its loss or disfigurement would be more than an architectural tragedy and a scandal for the body charged with safeguarding the national collection. It will expose Northern Ireland’s listed-building legislation as a sham.

The process of assessing Northern Ireland’s post-war architectural heritage was started by the Environment and Heritage Service (EHS) in 1991, as part of a wider survey of post-1914 buildings intended to bring the “first survey” of all buildings in Northern Ireland, begun in the early 1970s, up to date. When it ended in 1994, this pioneering thematic survey resulted in 45 listings of post-war constructions, including just one cultural building – the Ulster Museum, the youngest building on the list.

The museum was listed in July 1994 for “the way in which old and new are merged together” and as a “rare example of 20th-century architecture of international repute” in Northern Ireland. Legislation requires that listed buildings must be subjected to a detailed second survey before any alterations. The EHS began a systematic, province-wide “second survey” in the mid-1990s, intended to provide building owners with definitive advice on what aspects of each listed building, including spatial qualities, must be protected. It suspended the survey five years ago, however, when funding for consultant surveyors suddenly dried up before any of Belfast’s listed structures were reviewed.

The museum should, therefore, have funded an ad-hoc second survey report last year for EHS, but this was not done. No independent, comprehensive conservation plan was prepared, prompting an outcry from heritage organisations, when the full extent of the proposed alterations – which display a cavalier disregard for both the interior and exterior setting of the museum – were made public.

The Ulster Architectural Heritage Society objected to Hamilton Architects’ plans for the museum, citing a 1999 Northern Ireland Department of the Environment policy statement on planning, archaeology and the built heritage, which says listed buildings “can be robbed of their special interest as surely by unsuitable alteration as by outright demolition.” The society said the entrance façade is “a sculptural tour de force which should remain intact. The great cantilevered canopy. . . is a feature of ‘special interest’ and should not be filled in to form a café and restaurant. Any change would erode its character and amount to a breach of the planning policy statement.”

The Arts Council of Northern Ireland also called for the plans to be reconsidered – as did the UK branch of Docomomo, the Paris-based international body dedicated to the conservation of important works of modern architecture. It called the alterations “intrusive and insufficiently sensitive to the spatial and architectural qualities of the original”, describing the proposed covering over of the courtyard with a largely solid roof as “very damaging.”

Pym’s competition-winning extension (assessed by Sir Leslie Martin) is cleverly spliced onto the old. It draws out the channelled rustications and other mouldings of the earlier building until they butt against the new blocky forms of a cubist composition of galleries, which seems to recede and advance like drawers in a cabinet. The English historian Mark Girouard has likened the Ulster Museum as a whole to “one of those incomplete Michelangelo statues in which a highly finished torso emerges out of a block of rough hewn marble.”

Such an extraordinarily innovative approach to the massing of a building’s elements – which owes a debt to Mies van der Rohe’s long-vanished 1926 brick monument to Karl Liebknecht and Rosa Luxemburg, commemorating Berlin’s ill-fated Spartacist 1919 uprising – was unique for its time and would not reappear in world architecture until the completion of Cincinnati’s Contemporary Arts Center, Zaha Hadid’s first American building in 2003. Other influences are assimilated into a convincing whole in Pym’s masterpiece – from the materiality of London’s Hayward Gallery to the spiralling spatial arrangement, pioneered by Frank Lloyd Wright at the Guggenheim Museum in New York in 1959, to Kenzo Tange’s entrance canopy at Kurashiki City Hall, Japan, of 1960 and Le Corbusier’s Modulor proportioning system and fenestration patterns.

The question of how best to extend in a modern idiom a traditional building has taxed many of the greatest architectural minds. Pym’s extension is among the most successful solutions worldwide and merits respectful treatment. The brilliance of his design lies in the way the old building is made to fade into the new, like a pair of hands joined, with the fingers interlocked. It is hard to point to comparable examples – with the possible exception of Gunnar Asplund’s Gothenburg Law Courts of 1934-37 – where the basic lines of a neoclassical building have been projected into an extension as a means of integrating the two, and where the extension has then been lent weight comparable to the original structure but an architectural character entirely distinct.

Pym’s Belfast experience was not a happy one, however. The project has something of the Sydney Opera House saga about it: an unknown architect wins a big international competition, but resigns before the project is completed and doesn’t visit the building until several decades have passed. (In Sydney, after a gap of 40 years, Utzon is now back working again on the Opera House.)

The Department of Finance NI, which commissioned the building, took over the supervision of construction in 1968, halfway through the contract. A member of Pym’s London staff, Paddy Lawson of Portaferry, County Down, who had worked with Pym on the competition entry, joined DFNI’s Works Division architects’ branch under John F Harrison to maintain continuity in the implementation of the design. Another Ulsterman, Brian Lowe, was responsible for the interiors.

The Ulster Museum was Pym’s only major building. He specialised in conservation work, preparing the National Trust’s study of the impact of Concorde’s sonic boom on England’s cathedrals – which led to the banning of supersonic flights over Britain – and building the gazebo dedicated to the memory of Harold Nicolson at Sissinghurst in 1969.

In the mid-1970s, Pym gave up architecture and became an Anglican priest. Now in his early eighties, he recently co-authored a book challenging Einstein’s theory of relativity. “Belfast wasn’t ready for a museum of that kind,” he said last week from his Sussex home. “They didn’t like what we were doing – the vision we were running with – and wanted another architect. It was difficult. Architects need a strong personality to batter right through. Like Jørn Utzon at the Sydney Opera House, I felt I had to leave it.” He didn’t go to the official opening or to any of the award ceremonies. “It wouldn’t have been right,” he says. He misses architecture. Pym saw the building for the first time “within the last 10 years.

“There were some disappointing things,” he says. They included such previous unsympathetic alterations, already criticised in the “first survey” of the museum in 1994, as: “the large deep central court, originally open to the sky. . . roofed over with a lattice construction [to house the dinosaur exhibition] which does not conform to the established idiom of the building, and the insertion of an enclosed gift shop [which] spoils some views through the entrance hall.”

That is not all. The metal windows of the original building on Stranmillis Road were replaced with plastic double-glazed units and some openings blocked up to provide more wall space for exhibits. Exhibition screens obscure stained glass windows by Neil Shawcross. “Dusty and oppressive” concrete surfaces were painted white. Now, the heart of the complex is to be roofed over, when what’s needed is to work with the building’s DNA to create more light and views out. The existing entrance will go, to be replaced by a café behind a planar glass wall that will extend to the edge of the canopy’s curl, and a new entrance cut to one side. Extensive internal alterations are proposed. The changes will be irreversible.

Not many people have ever loved the Ulster Museum. The effect of the north-facing, brutalist concrete entrance façade is undoubtedly sombre, even if compensated by the setting of trees and lawns in the Botanic Gardens. Inside, a free spatial flow of air-conditioned, artificially lit galleries made from concrete, glass and black Pirelli rubber ascends in a helical arrangement that could, if the building were only respected, produce a series of dramatic and varied interiors.

There are problems of access that need urgent attention. There are leaks and it is hard to close off the temporary galleries, which form part of the museum’s main visitor circuit. More revenue needs to be generated through a better shop and café. But there are also bigger, curatorial, problems caused by a museum policy that seems driven by the number of exhibits on display – a hopeless task anyway, given the museum’s collection of 875,000 exhibits – rather than the quality of the viewer experience. A new approach is needed, but the current plan will only make things worse.

There is not enough enlightened architectural patronage in Northern Ireland; too often major clients are motivated more by short-term expediency than by a concern for architectural quality. The proposed overhaul of the Ulster Museum has already had one false start, in December, when, after design-and-build tenders were invited, not one developer expressed an interest in undertaking the work.

Instead of rushing ahead with its current ill-conceived proposals, the museum authorities would be better advised to take a leaf out of Sydney’s book, do right by the architect of its great museum and go back to scratch with its plans – this time basing them on a comprehensive conservation plan. It seems a necessary first step toward regaining public trust in its custodianship.

Although planning permission was granted for the proposed alterations in July 2007, the Ulster Architectural Heritage Society’s campaign to ‘Make the Most of Our Museum’ continues to seek support for an alternative vision. Join the campaign at http://www.ulstermuseumbuilding.org.uk/