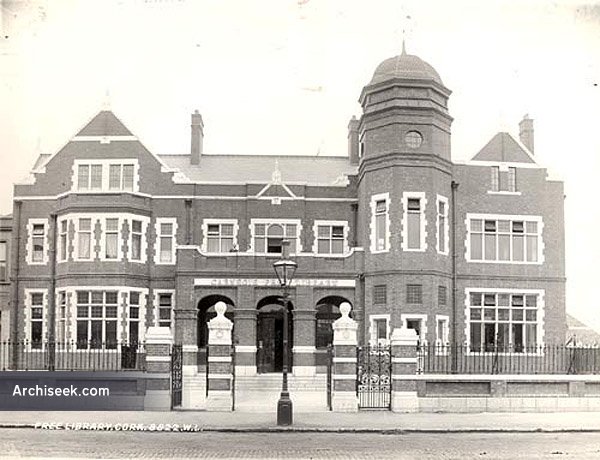 Foundation stone laid by Andrew Carnegie in 1903 with the building opening in 1905. Located on Anglesea Street next to City Hall, this elegant building lasted for only 15 years, until 1920. Destroyed in the fire set by British Forces in 1920 retaliating to continuing guerrilla activity by the IRA, which destroyed a good portion of the area. The burning of the Carnegie Library left the city without a public library service until 1924, when premises were provided on a temporary basis for a library in Tuckey Street. That service was transferred in 1930 to new premises behind a new Hiberno-Romanesque facade at nos. 57-8 Grand Parade.

British forces deliberately set fire to several blocks of buildings along the east and south sides of Saint Patrick’s Street during Saturday night 11 December 1920 and the following Sunday morning. Among the buildings completely destroyed on Saint Patrick’s Street were Roche’s Stores, Cash & Co., The Munster Arcade, Egan’s, The American Shoe Company, Forrests, Sunners chemist and Saxone Shoes. The City Hall and the Carnegie Library were also completely destroyed by fire.