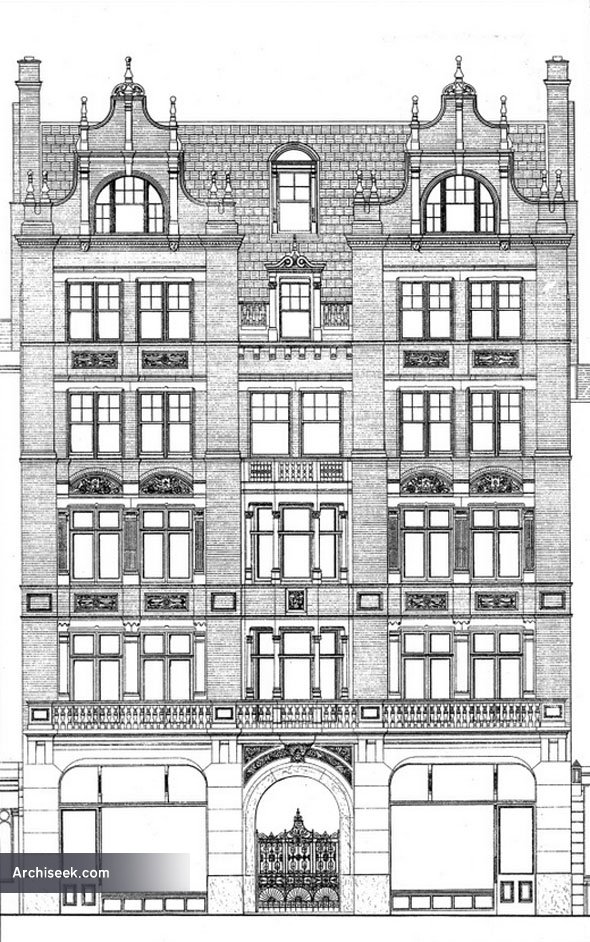 Front elevation published in The Building News, December 12th 1879. From a description published in July 1879: “A more important structure is now nearly completed in the same style for Anderton’s Hotel. Its front of red brick and stone is very lofty, the windows are made conspicuous features, and the facade is divided into two distinctly treated parts. The main portion is gabled with ornamontal ramps and finials ; the latter adjuncts are very flimsy and tawdry additions. The upper stories are supported upon a straight lintel with curved springings. The principal features in the facade are the two-light windows of stone, which have straight moulded lintels with segmental heads, on the second floor, the tympana being enriched with carving. The ends of these heads abut rather abruptly against the projecting red brick piers, which are carried up on both sides. On the upper floors the windows have also straight moulded heads of stone. The “oversailing” work in red brick in the upper stories springs in a rather clumsy manner from stone corbels between the -openings, and a little more breadth is wanted. Panels of cut brick relief adorn the interfenestral spaces of the front. The design is generally effective in its masses of rod-brick and stone, notwithstanding the -detail is crowded and inelegant in parts. The central strip of front above the arched entrance to the hotel is designed in quite another key ; there is no apparent connection between them. The stone bay windows jar with those in the flatly treated part and there is an evident want of unity and rhythm. The bay windows are carried up with small angle shafts of stone and transoms ; from these caps spring with moulded heads, the effect of which is rather feeble and tame. The arched entrance is constructed externally of polished granite. The bay or oriel is corbelled and springs from the keystone, and the carving of this part and the spandrels are somewhat finical and wanting in vigour. A balustrade with inverted balusters separates the ground story from the upper part. The brickwork appears to be executed with considerable care. We understand Messrs. Ford and Hesketh are the architects.”