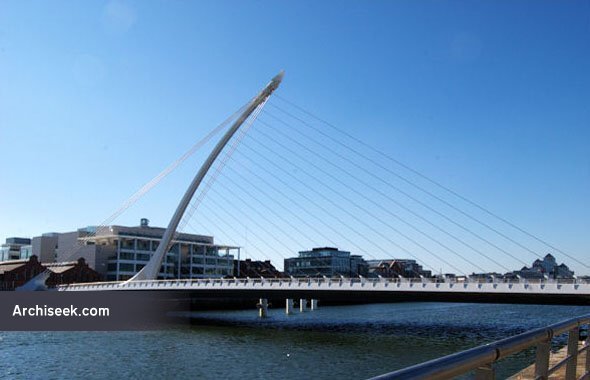 Dublin’s Samuel Beckett Bridge, designed by internationally renowned architect Santiago Calatrava cost €60 million and took ten years to complete. The 120-metre long, 48-metre high bridge spans the river Liffey from Sir John Rogerson’s Quay near Macken Street on the south side to Guild Street at the site of the new National Convention Centre on the north side.

It was one of two bridges commissioned from Calatrava by Dublin City Council in 2000. The other, the James Joyce Bridge, opened at Blackhall Place near Heuston Station on Bloomsday, June 16th, 2003. The bridge was projected in 1998 to cost £10 million, but the costs ultimately rose to almost €60 million. Designed to represent a harp on its side the cable-stayed bridge was made in the Netherlands and arrived in Dublin on a barge.