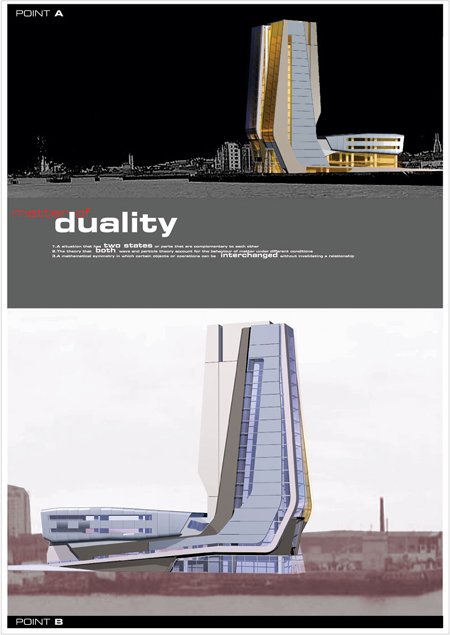 For an architect unfamiliar with a city quarter like the Dublin Docklands, the sheer liquid mass of the surrounding rivers is by far the most prominent characteristic of the site’s photographs. Designing a landmark tower on this spot – regardless of its planned usage – one feels that it has to overcome the disruptive presence of Liffey and Grand Canal by stretching its masses as expressively as someone who is trying to escape from a dead end. A discontinued flow that turns up to the sky.

Our proposal seeks to establish “an outstanding architectural statement” , creating a building form that stretches its masses along a flowing main line, visualizing its structural function. A longitudinally mounted tower core supports two concrete inverted massive arcs growing from the inclined part of the site north of the predominant building line area. This landscaped inclined wedge elevates the continuous public flow into the core of the platform element through the external access ramp alongside River Dodder. The external ramp is actually integrated in the eastern inverted arc, while the other arc’s base hosts the main entrance to the building from Britain Quay. Both of the arcs climb to the maximum height of 60m, where they are finally intergrated with the central tower core to form the U2 recording studio.

This pair of inverted arcs leads to the matter of duality that epitomizes the social status of the building. In mathematics duality is symmetry in which certain objects or operations can be interchanged without invalidating a relationship. The proposed tower balances between residential and commercial use, featuring typical roof plans that can accommodate multiple development scenarios, while the tapered tower element produces a variety of possible residential units that vary in both size and type.