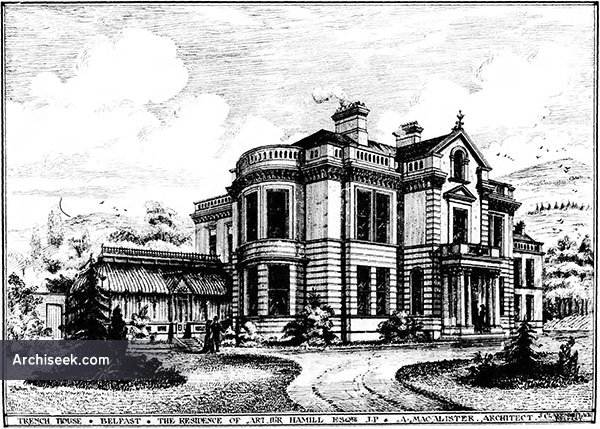 This large mid-Victorian mansion was built in 1880 by the leading property-owner in the locality, Arthur Hamill, and later handed over to the Catholic Church. In 1918, on the death of the last member of the Hamill family, the house and grounds passed, by will, to the Belfast community of the Sisters of Mercy.

The Sisters leased the house to the Bishop of Down and Connor and it remained the Episcopal residence until 1938. It lay largely vacant until it became a teacher-training centre, St Joseph’s College in 1947.

The expanding needs of teacher training led to the completion in 1960 of a major extension to the original house. The extension included a chapel, tuition block and a residential wing. Additional tuition accommodation was completed in 1969.
St. Joseph’s merged with St Mary’s College in 1986, and the Trench House site was finally closed in June 1996 when all Catholic teacher education was transferred to the Falls Road campus. Demolished in 2009.