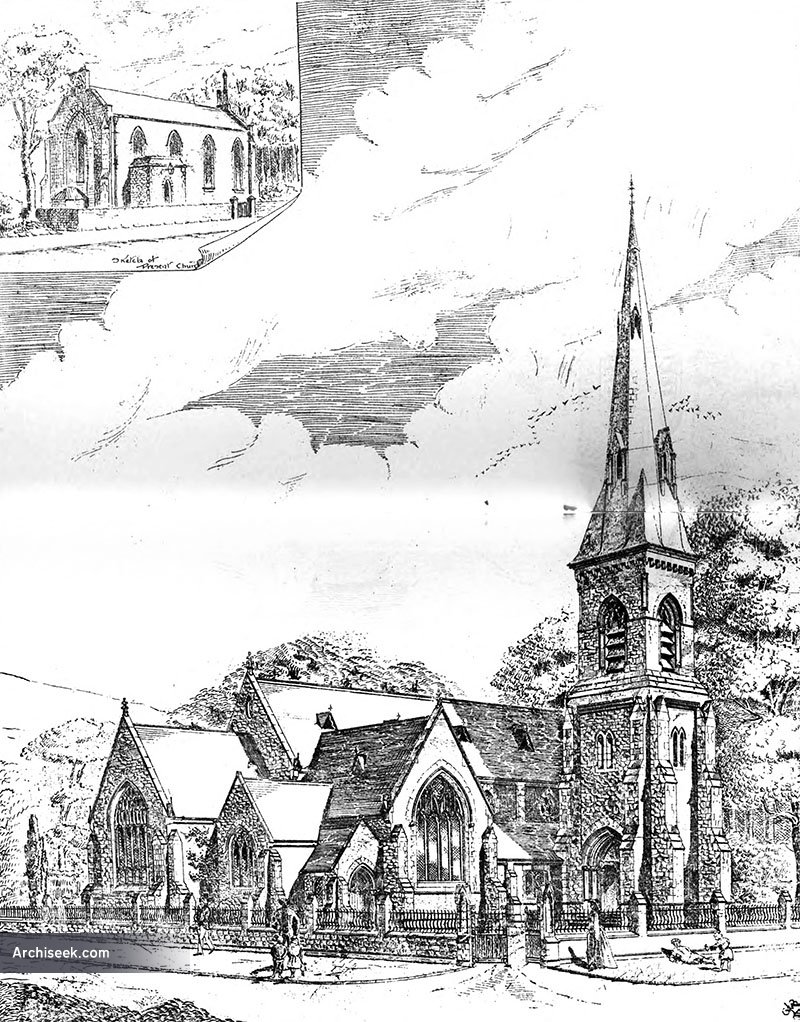 Unbuilt design by William Batt. Instead in 1894, a church was constructed to designs of Henry Seaver who was the rector’s brother. Seaver’s design was never completed as intended, the tower being omitted.

“THE accommodation in the present picturesque little church (a sketch of which is shown) being found inadequate, instructions were given some time ago to the architect by an influential member of the congregation, and one connected with it for many years, to prepare plans for a new church of suitable size for the increasing requirements of the parish. An eligible site had in the meantime been selected, viz., at the corner of the Malone Road and Osborne Park—the owner” of which, in an exceedingly generous spirit, had offered it for this purpose, at a merely nominal rent. Two plans were immediately prepared in accordance with instructions received, and laid before the rector, the member of the congregation referred to, and the owner of the site; and, after careful examination of the drawings, one of the plans was unanimously approved by these gentlemen. The liberality of the gentleman who instructed the architect, as expressed at the time, was almost unbounded, for he not only got the plans prepared, but also undertook to raise the greater part of the funds required to build the church, and requested the architect to give the organ-chamber special attention, so that the full tones of a fine organ he had already purchased, and intended to present to the parish, should be distinctly heard throughout the sacred edifice; and perhaps a peal of bells might be added. At this important stage of the proceedings, the apparently worthy donor unfortunately became indisposed, and remained so for a considerable time, and on his recovery he took no further action in the matter that we are aware of ; it is to be regretted that affairs still remain in statu quo. Since these events occurred, the tramway has been extended to Balmoral, and many new buildings erected, causing the want of a larger church to be felt greater than before.

A perspective view of the proposed building is given with our present issue, it being understood that neither the select vestry nor the congregation had an opportunity of inspecting the drawings, as we glean from correspondence which took place a short time back in one of the local journals.

On plan the church is cruciform, and consists of nave, chancel, aisles, transepts, vestry, organ-chamber, with tower and spire at north-west corner 135 ft. high. Consideration was given in its arrangements for future extension when found desirable, and it was intended to be built and completed in a plain and simple manner, without any superfluous ornament, so that it could have been erected at a moderate cost. The architect who pre pared the plans referred to is Mr. William Batt, M.R.I.A.I., Garfield Chambers, Royal Avenue, Belfast.” Published in The Irish Builder, November 15 1890.