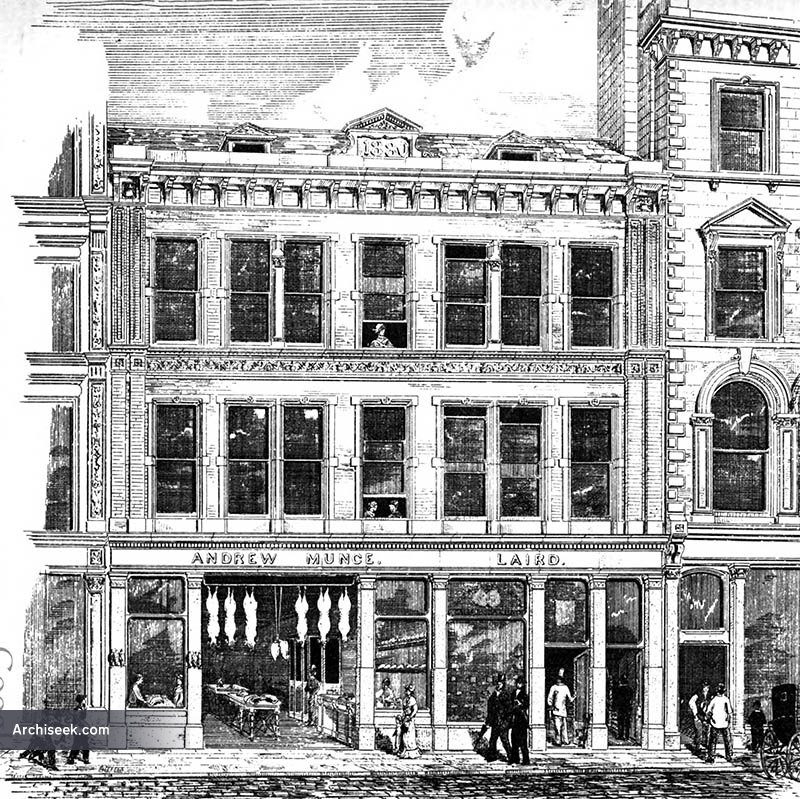 Demolished circa 1980 by which time it had acquired an extra storey. Replaced by a poor commercial building also in brick which attempted to mimic the rhythm of the windows in the original.

“Mr. Munce’s own shop constitutes, how ever, the chief feature of attraction. This has a frontage of 26 ft., with a depth of about 65 ft., behind which is the workshop for per forming sundry matters connected with the business. In addition to provision for the best display of the goods, everything about the shop has been arranged both inside and out with a view to the most scrupulous cleanliness.

The pilasters which support the front, and the plinths under the windows, are all, as seen both from the outside and the interior, of polished grey granite, supplied from the Bessbrook Granite Company’s works, County Armagh.

The walls of the shop are all built of light cream coloured glazed bricks, diversified with bands of blue similarly glazed bricks in ornamental patterns, all supplied from Messrs. William Ingham and Son’s works, Wortley, Leeds. The beams and panelling of the ceiling are of pitch pine, highly varnished, and the shop counters, tables, and shelves being all of white marble, it will be seen that every portion of the shop not merely affords no surface capable of absorbing dirt or grease, but allows facilities for the application of water in every part by means of hose or otherwise.

The entrance is wide, so as to admit of a marble table in the centre, with room for the customers to pass on either side, the massive metal framework which supports the marble slabs of the tables being arranged to run with wheels on a tramway let into the floor down the middle of the shop, so that the whole can be easily moved back or forwards at convenience. All the other fittings and appurtenances of the shop, the galvanised iron bars with sliding hooks, rings, &c., for the support of the carcases, and the columns supporting the beams, are of a massive and appropriate character.

The entrance is closed by revolving shutters at night, or when necessary, pierced for ventilation. Portion of the front above the polished granite work is executed in Dungannon stone, for the window-dressings, cornices, string courses, &c., the spaces between being filled with dark-red glazed bricks from Messrs. Ingham and Sons, of Wortley, relieved with bands and panels of dark-brown Faiénce ware, supplied by Messrs. Wilcock and Co., of Burmantofts, near Leeds. The introduction of these glazed bricks and Faiénce ware are, we believe, almost a novelty on this side of the Channel, but from their bright, clear appearance, their weather and smoke-resisting preperties and durability, are pointed out as being well qualified to fill an important place in the street architecture of the future. They can at any time be cleaned by use of hose and town water from the mains.

The stairs to the upper part of the premises, which lead from Corn Market, are very easy and substantial, formed in oak and mahogany. The rooms are well lighted and lofty, and have every convenience that could be desired in the way of lavatories, &c., well lighted and ventilated.

The contractor for the works generally was Mr. William McCammond, of Duncairn street; the architects being Messrs. Thomas Jackson and Son, of Plough Buildings, Corn Market.”