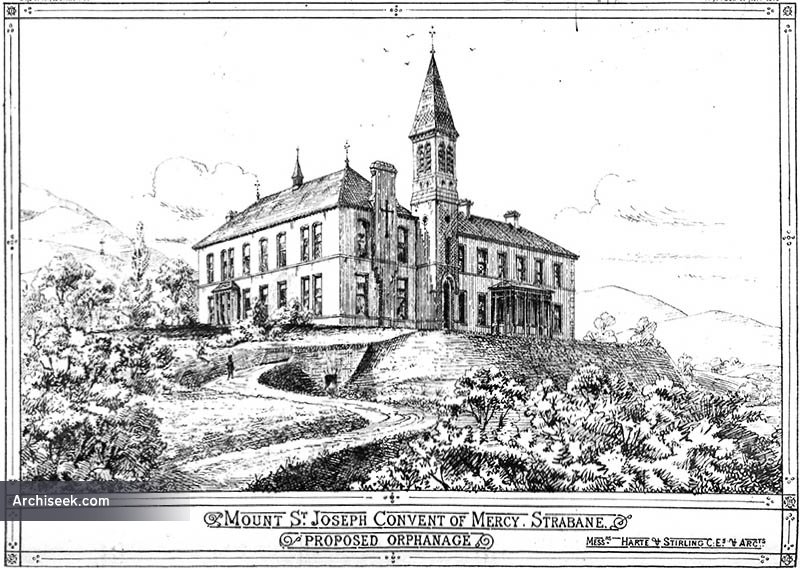 The Convent of Mercy opened June 9th 1868 with a later extension by Harte & Stirling during 1870-71. The chapel was added in 1881 to designs by O’Neill & Byrne. Constructed initially as an orphanage and centre for the education of neglected and abandoned girls; later the convent included a boarding school for girls that had had a more conventional family upbringing. The laundry closed in 1928 with the orphanage closing in 1950. Continuing as a school, before the convent and chapel finally closed in 1994. The buildings have since been demolished.

The Irish Builder, November 1 1870: “Sisters of Mercy in Strabane, feeling deeply the want of a home for the orphans of the poor, where they may be protected and trained for various occupations, have undertaken to build an addition to their present orphanage, which has accommodation for only forty children, the extended accommodation now proposed is for 150 more; it is hoped when this shall have been completed that the industrial school attached to the institution will be self-supporting. The aim of the community is to train female orphans for active service as good and faithful domestic servants, so as to supply a deficiency widely acknowledged.

The new building comprises a dormitoryfor 150 children; a refectory, with kitchen and the offices necessary thereto; a lavatory, with closets, and a dressing-room. A separate staircase affords direct access from the dormitory to the several departments on the ground floor and to the play-yards. The new entrance porch is intended for mendicants in waiting for alms, &c. A new porch, which will combine the advantages of a verandah and of a conservatory, will be erected in front of the present entrance, which will still be the principal entrance to the institution.

The view (vide our illustration in this number) presents a new wing attached to the old building, with a tower marking the point of junction; and as the house stands on an elevation, with a bold terrace in front, which is approached by a winding avenue on an easy ascent, it is expected that, though simple in detail, this manner of grouping the several parts will show effectively.

The style of finish will be plain and substantial, use being made, as far as practicable, of the materials of the locality. Considerable attention is given to the heating, lighting, and ventilation, and all the modern improvements, with the view to securing economy ofspace, labour, and expense, and for affording facility for cleanliness, are proposed.

It is estimated that the cost of the building for entire completion will not be less than £1,800, which is being raised chiefly by donations from the charitable; the lady superioress is unremitting in her efforts to augment the resources of the institution. A bazaar and grand drawing of prizes in aid of this benevolent undertaking is being organized, to take place on the 9th, 10th, and 11th inst., when a large number of valuable prizes will be drawn for.

The design for the new buildings has been prepared by Messrs. Harte and Stirling, architects and C.E.’s, of 179, Gt. Brunswick street, Dublin, and Buncrana, under whose superintendence the works will be carried out.”