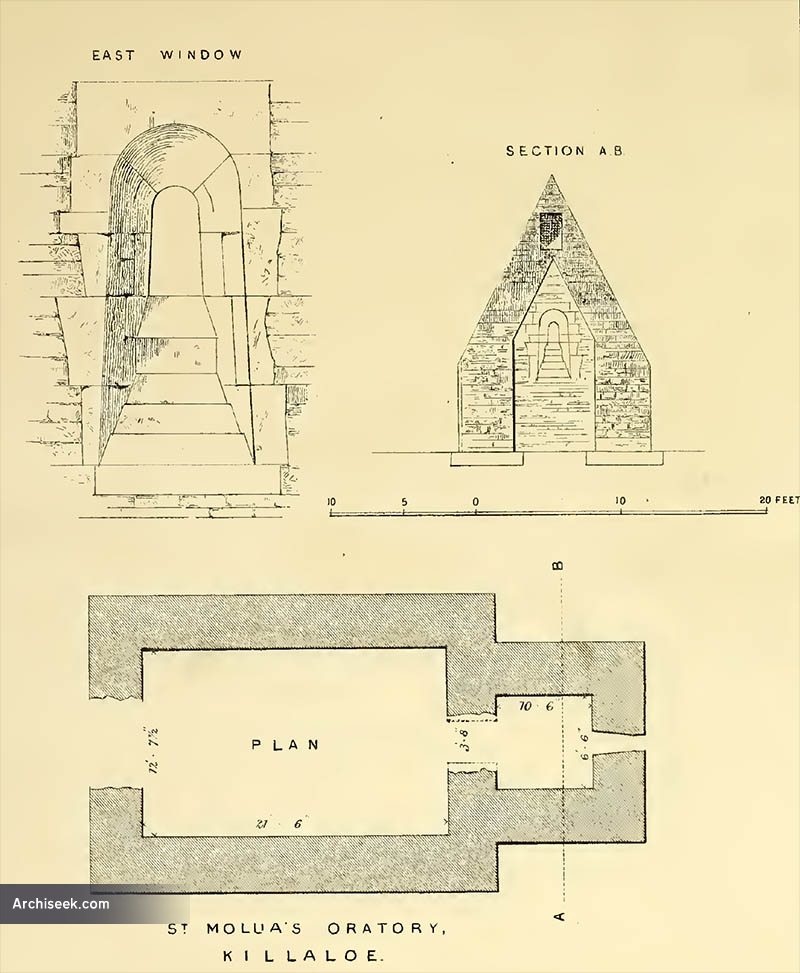 St. Molua’s Church was originally constructed on Friar’s Island in the River Shannon, to the south of Killaloe town. Believed to have been constructed in two stages around the 9th and 10th centuries. In 1929–30 the Shannon hydroelectric scheme raised the water level and submerged Friar’s Island, and the church was dismantled and brought north to be constructed on its present site in the grounds of Killaloe Cathedral.

“About the centre of the islet is a small church, consisting of a ruined nave and a nearly perfect chancel, the latter being the original oratory of St. Molua. Its dimensions are 10 ft. 6 in. by 6 ft. 4 in., clear of walls, which are 3 ft. thick on the flanks, the gables being 3 ft. 4 in. It was lighted by a semicircular- headed ope, 1 ft. 6 in. high by 9^ in. wide externally, having large inward splays, the head being cut out of a single stone. The original doorway was in the west gable ; but when the nave was added, the door-ope was cut away and enlarged, and an ope to the chancel constructed, 5 ft. 9 in. wide : the alteration is quite palpable. A rude door-ope was also cut through the south wall of the oratory. Its most remarkable feature, however, is the stone roof, which is constructed of rectangular slabs of various thicknesses, laid in courses, each overlapping the preceding one, and dressed both inside and outside to the rake of the roof, which has the same angle both internally and externally. Under the ridge is a rectangular airchamber, 2 ft. by 1 ft. 3 in., having an external vent, and communicating internally by a square ope in ceiling of 1 ft. 3 in., and close to the west gable. This chamber was evidently for ventilation ; it also lightened the dead weight in the apex of roof. This curious little structure appears to have been originally built with great solidity and care. The masonry was of large-sized rubble, dressed and accurately fitted ; it has, however, been much injured and dilapidated by the growth of trees and ivy through the joints both of walls and roof. It is, however, in wonderful preservation, considering the usage it has undergone. The nave, which had been added at some remote period, was itself a building of great antiquity ; it was 21 ft. 5 in. by 12 ft. 7 in., clear of walls, of which only about 3 ft. in height remain standing. The west gable fell about twelve years before my visit.

A drawing in “ Grose’s Antiquities ” shews the doorway to have been a massive squareheaded ope, with converging jambs. St. Lua, in the early part of the sixth century, built a cell in this place, hence it was named Cill-da-Lua, the cell of Lua, from which Killaloe. We have every reason to believe that the oratory on Friar’s Island was this identical cell. In our hagiology the name is Molua, the endearing term Mo being prefixed to the names of many of the saints of our primitive church. It is worthy of remark that this little oratory, though subjected to violent alteration and dilapidation from neglect and want of repair, still stands, and by judicious care may stand another 500 years, while the more recently built nave has all but disappeared.” The Irish Builder