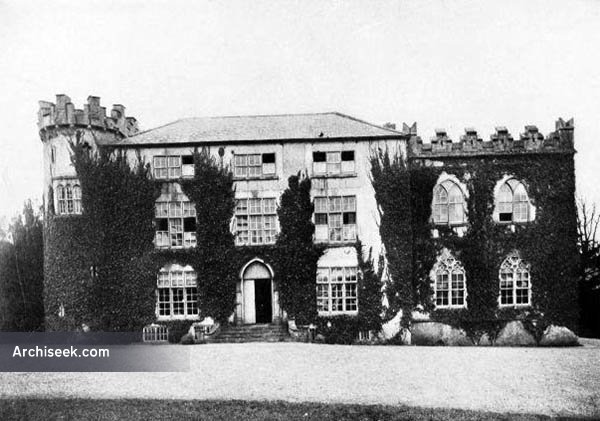 A castellated Georgian mansion with pointed windows and a turret. Built on the site of an earlier castle, it incorporated part of the original fabric and the moat and fortified walls. The seat of the Rolleston family from the 1740s to the 20th century.

Described in Wanderings in Ireland by Michael Myers Shoemaker in 1908: “I understand that it is the only perfectly moated mansion remaining in Ireland. There are fish in the moat, and on one side a man can swim in six feet of water for some hundreds of feet. The portions of the building which we inspected consisted of a large square hall, dining-and drawing-rooms which stretch across its front, and a large library in the rear. The hallway, like most in the land, is decorated with the antlers of many deer, and in the drawing-room quaint prints and engravings and portraits of long dead dames and squires adorn the wall, while through the diamond-shaped panes of the casement the leaf-flecked sunshine starts many a face into life as it flits across them. ” Now demolished.