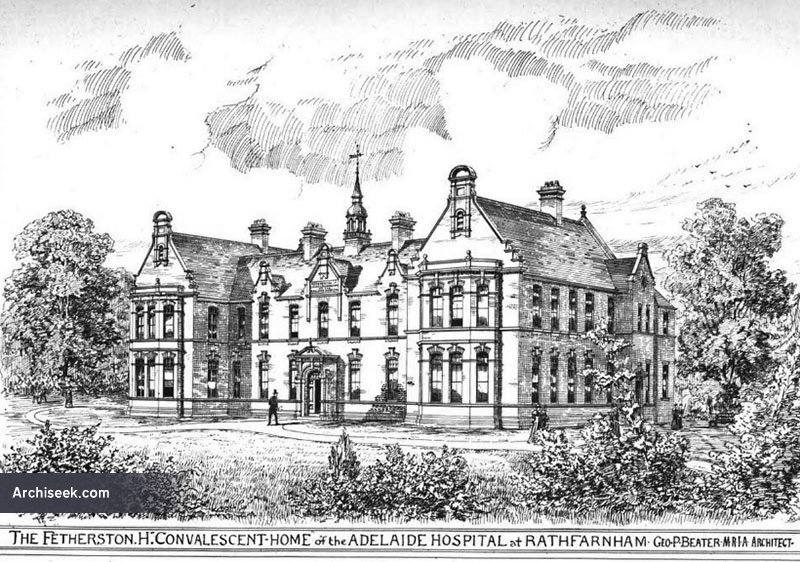 Constructed as a convalescent home for the Adelaide Hospital. In October 1961, the Representative Church Body purchased the Fetherstonhaugh House, Rathgar, as a ‘Divinity Hostel’, later renamed Braemor Park. Now the Church of Ireland Theological College with a sizeable extension from circa 1964 attached.

“The Fetherston-Haugh Convalescent Home of the Adelaide Hospital, of which we give a perspective view has just been completed for the Trustees of the Adelaide Hospital, from designs by and under the superintendence of Mr. Geo. P. Beater MRIAI, architect. Mr James P. Pile being the contractor for the general work, and Messrs Curtis and Son for the gasfitting. The building which will accommodate 13 male and 13 female patients is of pleasing design in the Queen Anne style of architecture, built of Portmarnock red brick with Portland stone dressings. It is fitted up with every convenience for the patients, whilst requisite rooms for committee, matron, nurse,s and servants, &c., are also provided. The grounds surrounding the Home are extensive, and very picturesque, the building itself standing on an elevated site overlooking the River Dodder with its well known beautiful valley, with wooded scenery. A gate lodge to harmonise with the main building is now in course of erection from designs by the same architect and of it we hope hereafter to give an illustration.” The Irish Builder, July 15 1894.

“So this building was reconfigured as a chapel, common room, games room, and lecture hall, with offices and a residential flat for the warden upstairs, to which were annexed a new dining hall, kitchen and additional staff bedrooms above. Alongside the original house, a new wing of 45 study bedrooms for students plus an additional staff flat were constructed to meet the growing needs of students in training, and tastefully positioned with the windows facing south–easterly towards the Dublin Mountains.” Report on the architectural features of the premises, by Ian Roberts, Architect, Church of Ireland Gazette, 21 February 1964