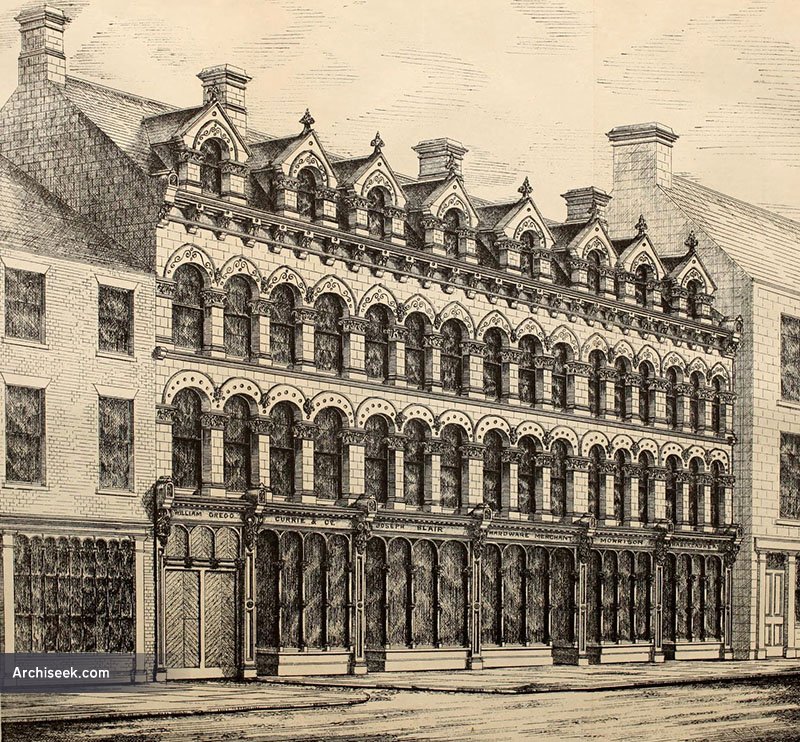 Now demolished, but originally built in two stages to the one design due to land lease issues. Constructed for Gregg’s, the Ironmongers. Gregg as developer “in a most praiseworthy way set them back two feet without asking any compensation from the town council.”

“These premises occupy the site on which formerly stood some of the oldest houses in the town, which, being in a dilapidated state, the proprietor pulled them down and erected the new buildings, setting them back about 3 ft. from main front, so as to increase the width of footpath, and without being asked by the Town Council. The shops have ornamental pilasters, and, as well as sashes, richly carved caps and moulded bases and bold entablature with massive stop blocks. The sashes are filled with best polished plate-glass in single panes, and on those of sash doors neat ornaments are embossed. The pilasters and sashes are painted quick black, stained and varnished, and well relieved by gold hatching. The buildings have greatly improved the appearance and character of the street. Owing to the leases expiring at different periods the premises were built in two portions; four of the shops were built by Mr. William Hunter, and the remainder, including large stores at rere, by Mr. Thomas M’Arthur. The works were executed in a satisfactory manner according to the plans and specifications prepared by Mr. William Batt, jun., and under his superintendence.”