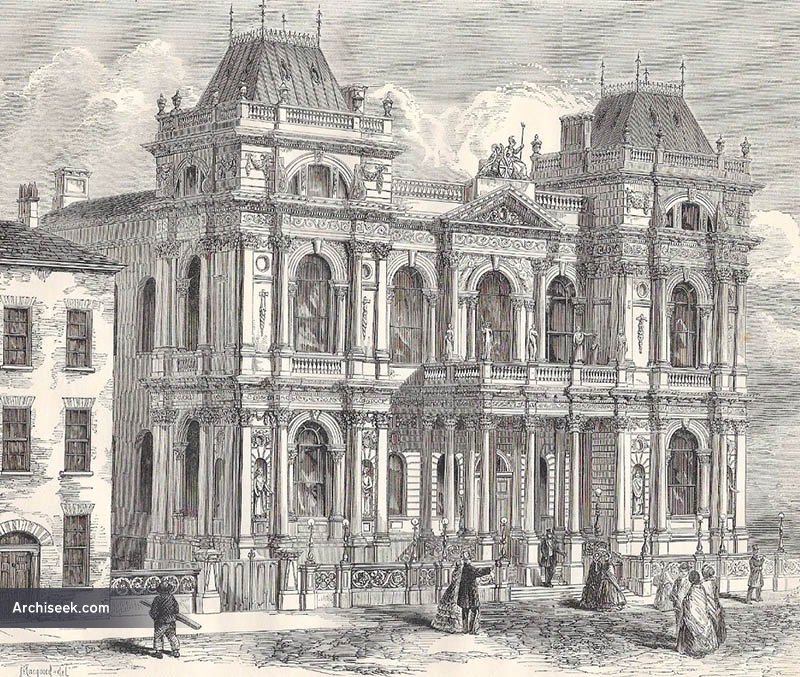 Design entry for new headquarters for the Ulster Banking Company. Published in The Building News, January 21 1859. The competition was won by James Hamilton.

“Mr FitzGibbon Louch of Sackville street Londonderry. architect. is the author of the design which we illustrate. The elevations we are informed are prepared in strict accordance with the printed instructions and plans. The design is Italian, the wings are crowned with Mansard roofs. The Corinthian shafts of the facade and cash office to be executed in polished Aberdeen granite with white marble bases and capitals. The discs over niches filled in with varieties of polished Irish marble, the façade to be executed in Aubigny stone. The windows are Venetian. The centre is formed by a Venetian window with clustered columns supporting a pediment, which is surmounted by a sculptured group of two figures, symbolical of Hibernia, supported by Fame. The tympanum of pediment is richly sculptured with the arms of the Province of Ulster. The six figures in niches are symbolical of the principal nations benefited by the banking system. The portico is formed of richly clustered Corinthian pillars surmounted by a balustrade and pedestals on which are figures of Justice, Mercurius, Minerva, Ceres, Bonus, Eventus &c. The cash office is lighted by a handsome dome light, the panels between the clustered columns are filled in with frescoes symbolic of Trade, Commerce, Art, Industry, Agriculture, &c The building to be constructed fireproof on Fox and Barrett’s principle.”