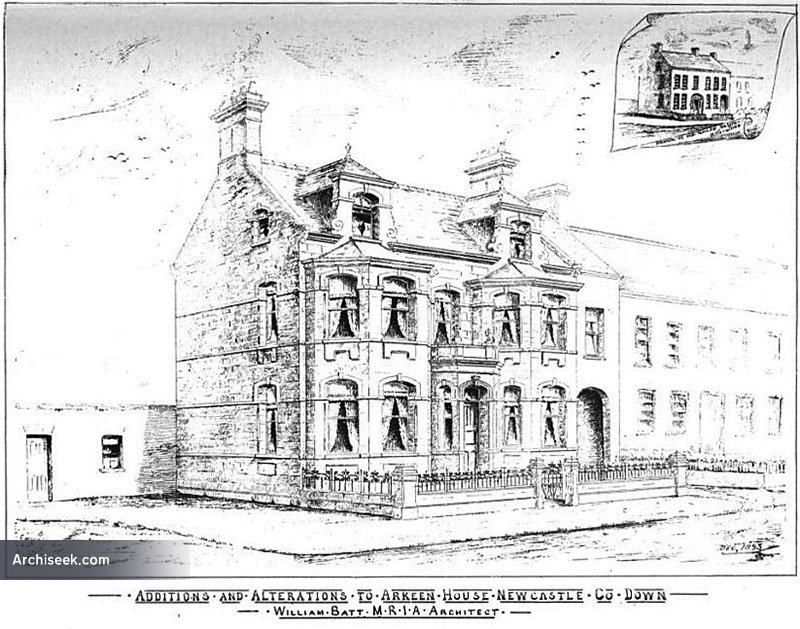 “THIS house which a short time back purchased by Mr. George G. Sloane and stands forward from the front of Bellvue Hotel, occupying a very position facing the sea, and together the offices, was allowed to get into a dilapidated condition.

It is one of the oldest in the place, and (as shown by sketch in upper part of illustration) was a plain simple whitewashed before being altered and changed to its handsome and modern appearance.

In front it was enlarged by adding bay windows, projecting 5ft from face of walls and carried up two storeys, giving very commanding views all round, and a neat porch is formed between bays, and completing the attics by ornamental dormers in roof. At rear a return building has been added, on ground floor mistress’s pantry, larder, cook’s pantry, scullery, and over these for servants &c. The remainder of the premises including offices thoroughly overhauled and all made complete. The sanitary appliances are of most recent kind, and electric bells been introduced so as to have the house every respect up to date, and made for a moderate outlay.

The whole of the rough casting in, and slating on gable was removed, finished with best Portland cement mouldings, ornamental strings, and as shown. The contract which has been tedious and troublesome one owing to unforseen difficulties, which in this and almost every case of this description arise, was carried out by Messrs J. and F . Neill, Newcastle in a proper manner to the of the architect. The wrought iron railing and gate which front area were supplied by Messrs. Shaw and Co. of Belfast. The works were executed in with the drawings prepared by Mr. Batt architect of Royal avenue Belfast, and under his superintendence.” Published in The Irish Builder, February 15 1894.